Can Revelation be Interpreted Chronologically? 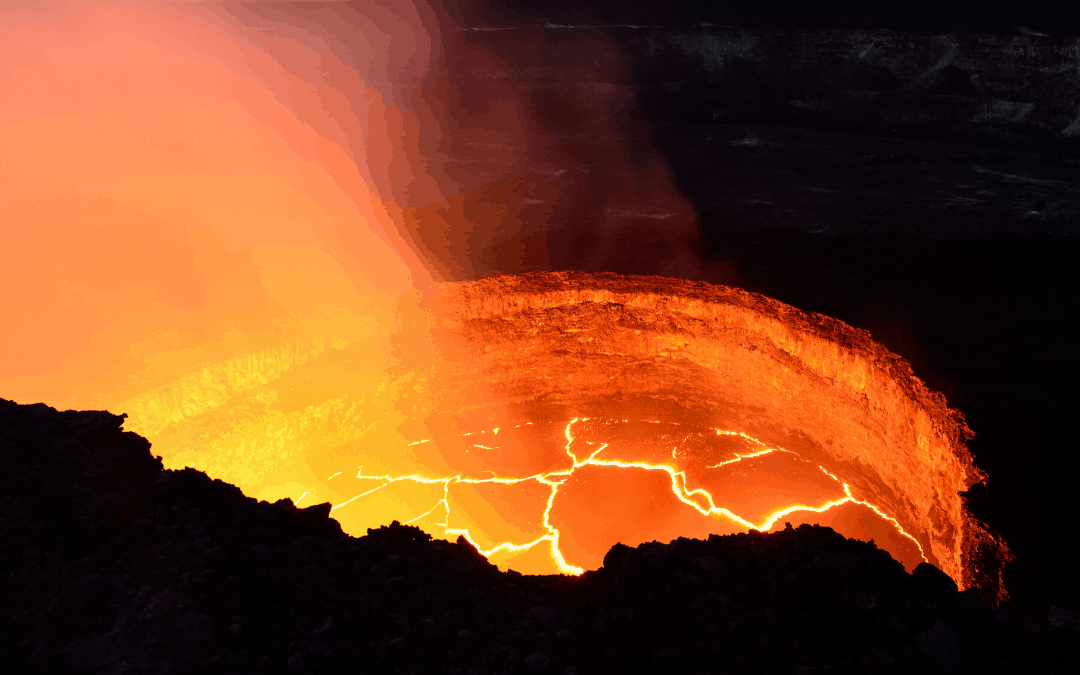 There is an attack on the truth of the Lord’s return today and especially about when the Rapture will occur. Scripture clearly teaches that the 7-year Tribulation begins with the signing of a 7-year covenant between Israel and a Roman Prince (Daniel 9:27) and at that time the Church will be raptured.  It is “the time of JACOB’S trouble…but he shall be saved out of it” (Jeremiah 30:7).

There are several different Pre-wrath theories. Each teaches that the Church will go through part of the Tribulation and be raptured DURING THE 2ND HALF of the seven years. They identify only the final stage of the 2nd half as the Day of the Lord and the WRATH from which the Church is saved. One version of the “Pre-Wrath Theory” is as shown on the following chart.

The Key to Interpreting Revelation

A) Chapter 1 is the things which John had seen – a vision of the Lord.

C) Chapters 4 to 22 are the things FUTURE hereafter the Church Age – after the Rapture which he sees in Revelation 4:1-2.

The Chronology of the Book of Revelation

All through Revelation we see that event FOLLOWS event. Prophets were shown future events happening in advance as they occurred; they saw the future before it occurred just as the Lord showed Peter, James, and John the 2nd Advent on the mount of transfiguration (Matthew 16:28;17:19). Also Micaiah saw the defeat of Israel by the armies of the Syrians (1 Kings 22:7) before it happened.

“After this I looked, and, behold, a door was opened in heaven: and the first voice which I heard was as it were of a trumpet talking with me; which said, Come up hither, and I will shew thee things which must be hereafter. And immediately…” (Revelation 4:1-2).

2) In heaven Christ takes the 7 sealed book of tribulation judgments. These contain the wrath of God (Revelation 5:1).

4) Chapter 7 begins with, “AFTER THESE THINGS…” 144,000 Jewish “servants of God” are sealed and protected from the Trumpet judgments about to be poured out. Again in chapter 7:9 we read “AFTER THIS…” there is a great multitude of “ALL NATIONS” including Jews who are saved when the 6th seal is opened according to Ezekiel 38:19-23 & 39:22-29, no doubt through the preaching by the 144,000. (Matthew 24:14). God’s wrath is poured out in the Seal Judgments. Revelation 6:17; Ezekiel 38:18-22. This is not just the wrath of man. The pre-Wrath theory teaches that God’s wrath is confined to the Vial judgments; therefore they say that the seal and Trumpet judgments are the wrath of man and not God’s wrath. They are wrong. Men will cry out that “the great day of His wrath is (has) come!” (Revelation 6:17). 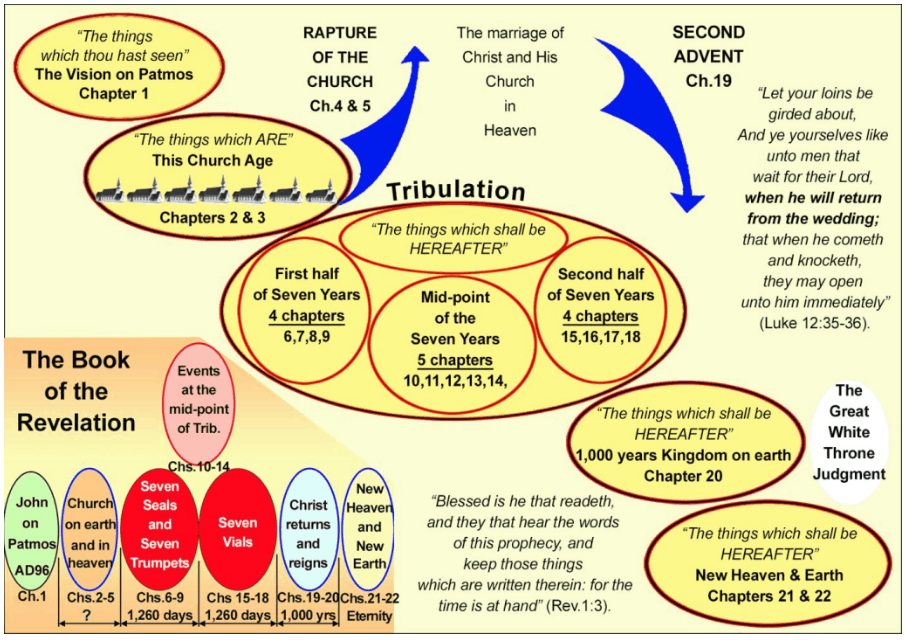 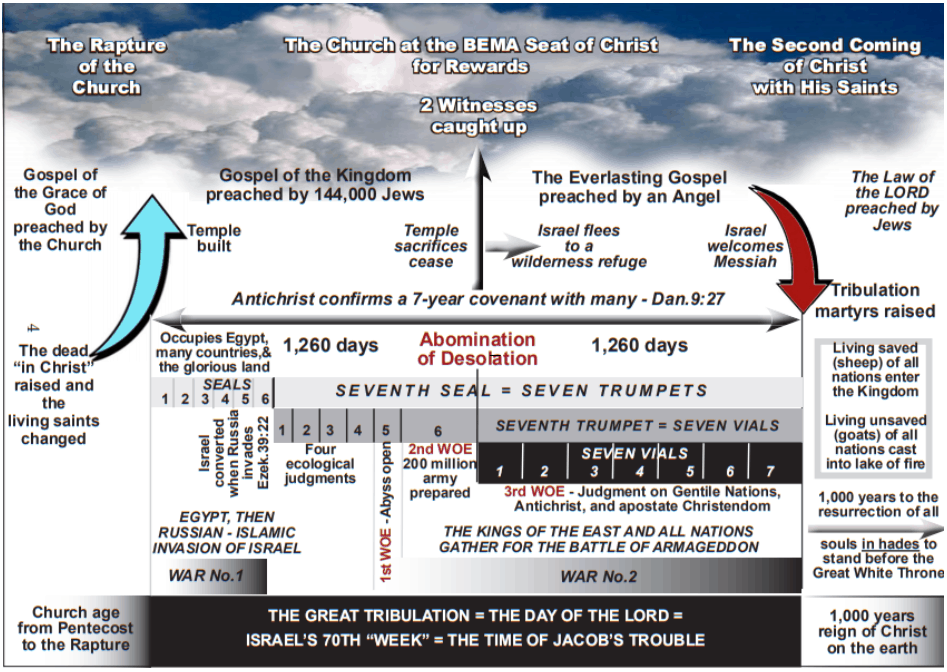 7) The last three trumpets are described as three WOES and they follow in sequence. eg “One woe is past; and, behold, there come two woes more hereafter” (chapter 9:12).

8) This brings the Tribulation to the Mid-point of the 7 years because two witnesses are slain in chapter 11 after they witness for 1,260 DAYS. They are slain by the Beast who is not revealed until chapter 13 at the mid-point.

9) Chapters 10 through 14 describe the events occurring at the mid-point of the 7 years eg. the rise of the Beast/persecution beginning against redeemed Israel. When the Beast is revealed in chapter 13 he reigns for 42 months which is the second half of the 7 years and the redeemed Jewish nation is persecuted for 1,260 days Revelation 12:6.

10) Chapter 15 announces the 7 LAST PLAGUES which are directed against the Beast and his kingdom. The reason for this is obvious. The Beast is given power at the mid-point of the 7 years but as “the (Roman) prince that shall come”, he signed a 7-year treaty with Israel immediately after the Rapture when the Jews were totally unbelieving. Every saved Jew in this Church age would have been a member of the Body of Christ and therefore raptured.

Now, at the mid-point of the 7 years, the Beast still has a treaty with a nation that is now all saved (Romans 11:26; Jeremiah 31:34; Ezekiel 39:22-29) under the New Covenant (Jeremiah 31:31-34). At this point the Beast turns on the remnant seed of Abraham in an attempt to wipe them out. Satan comes down with great fury; the Roman prince is possessed by the demon king from the Bottomless Pit (Revelation 11:7) and the second half of the 7 years is therefore a conflict between God and Satan; Christ and Antichrist; the followers of the Lamb and the followers of the Beast.

In Revelation chapter 14 John sees an angel fly through the heavens warning the inhabitants of earth NOT to receive the mark of the Beast. At this half-way point the world will be divided between those with the mark and those without the mark.

The “LAST plagues” (Revelation 15:1) are God’s answer to the Beast in the 42 months that he reigns. ie the 2nd half of the Tribulation. The 7 Vial judgments are directed against the kingdom of the Beast and all who receive his mark of allegiance. This must be the last 42 months because the Beast receives his power at the mid-point of the 7 years.

11) Chapter 16 describes the 7 “last plagues” in sequence. Verses 1 to 12 describe the first 6 Vials concluding with all nations gathered against Israel.

12) Chapter 16:17 is the final Vial poured out on Mystery Babylon and a full description is given of her destruction in chapters 17 and 18.

13) The return of Christ WITH His Bride is the subject of Revelation chapter 19 after the harlot woman is burned. Christ comes “immediately after the Tribulation” (Matthew 24:29). Christ returns “from the wedding” in heaven (Luke 12:36) so the Bride must be raptured beforehand to attend the wedding, while the marriage SUPPER follows on EARTH. The guests are the “friends” of the Bride and Bridegroom (John 3:29) – i.e. those saved who survive the 7 years of Tribulation will be guests.

Matthew reveals that there will be the judgment of the living nations AFTER the return of Christ – (Matthew 25:31-46). This happens “when the Son of man shall come…THEN shall He sit upon the throne of His glory”. The sheep go into the kingdom and the goats are slain, raised, and sent to the lake of fire with the Beast. (Daniel 12:2; 7:11; Revelation 19:20). The Tribulation martyrs are raised as part of the FIRST resurrection (Revelation 20:4).

The saved from the millennial kingdom take part in the final stage of the “first resurrection” of the just and go into the eternal kingdom of Christ Revelation 20:5 when the thousand years “were finished”.

CONCLUSION: The Book of Revelation is undoubtedly a chronological outline of future events and the Prewrath Theory is just that – a Theory concocted by men.

Many events are similar but that does not make them the same event. For instance: The earthquake in Revelation 6:12 is global but it is NOT the same as the earthquake when Christ returns at Armageddon. Revelation chapter 6:12 describes the global earthquake that occurs when the Russian/Islamic armies are destroyed in the first half of the Tribulation as described in Ezekiel 38:18-23. Joel chapter 2 also describes this earthquake and places it in “the Day of the Lord”. We read: “The earth shall quake before them; the heavens shall tremble: the sun and the moon shall be dark, and the stars shall withdraw their shining: And the LORD shall utter his voice before his army: for his camp is very great: for he is strong that executeth his word: for the day of the LORD is great and very terrible; and who can abide it?” (Joel 2:10-11).

This occurs when “the northern army” is destroyed. But Joel chapter 3 describes the second half of the Tribulation which concludes with the return of Christ and His reign on earth. In the second half it is not a “northern army” (Joel 2:20) but “all nations” that come into the land (Joel 3:2) and again the sun is darkened and the earth will shake (Joel 3:15-16).

So the earthquake and signs in the heavens occur twice in the Tribulation. First, in chapter 6 when the Russian/Islamic “northern army” is destroyed and secondly in chapter 16 when God rescues His people from the Beast at Armageddon. On both occasions Israel is rescued!

Joel’s prophecy is chronological and John’s Revelation is chronological; both describe the two global earthquakes during the last seven years before Christ returns to reign.