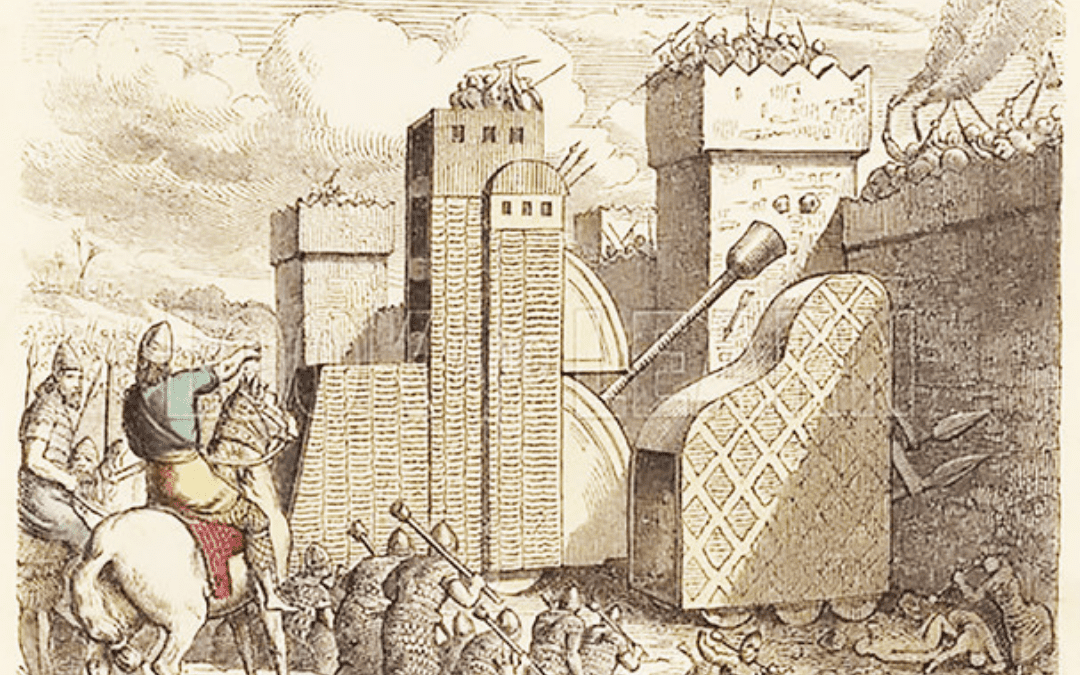 Through the wrath of the LORD of hosts is the land darkened, and the people shall be as the fuel of the fire: no man shall spare his brother. (Isaiah 9:19).

The Prophet Isaiah lived in dark days of the history of Judah and Israel. The evil northern kingdom of Israel was approaching the end of its time. After Jeroboam II had reigned 41 years there was a period of 24

yearswhen there was no king in Samaria. Then there was a series of five Kings four of whom were assassinated before the final king Hoshea, was taken away captive by the Assyrians in 721BC.

The Rise of Assyria 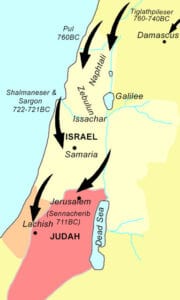 At this time Assyria was a rising power spreading her influence west and south; sending her forces into the northern kingdom of Israel and taking away captives. Pul and Tiglathpileser III (1 Chronicles 5:26) are mentioned and Isaiah states they

afflicted the land of Zebulun and the land of Naphtali and afterward did more grievously afflict her by the way of the sea, beyond Jordan, in Galilee of the nations (Isaiah 9:1).

Zebulun and Naphtali were the tribes of Israel to the west of the Sea of Galilee.

In the days when Pekah reigned in Israel about 759 to 739BC, Pekah had formed an alliance with Rezin King of Syria and they had sent their armies south into Judah but were unable to capture Jerusalem (Isaiah 7:1). Their plan had been to instal their King on the throne of David.

Ahaz the King in Judah had retaliated by contacting Tiglathpileser III the King of Assyria and offered him much gold if he would attack Syria and kill Rezin. Tiglathpileser obliged and Ahaz stripped the gold from the house of the Lord and took it to Damascus to thank him for a job well done.

While Ahaz was in Damascus however he saw a pagan altar that impressed him and he sent the design back to Jerusalem and had it built in the House of God for his personal use.

These were difficult times for Isaiah the prophet. King Ahaz had turned to idolatry and even caused his son to pass through the fire as an offering to the heathen gods. When the King worshipped the gods of the heathen the people soon followed.

God Would Send the Assyrians
into Judah

The LORD shall bring upon thee, and upon thy people, and upon thy father’s house, days that have not come, from the day that Ephraim departed from Judah; even the king of Assyria. And it shall come to pass in that day, that the LORD shall hiss for the fly that is in the uttermost part of the rivers of Egypt, and for the bee that is in the land of Assyria.
And they shall come, and shall rest all of them in the desolate valleys, and in the holes of the rocks, and upon all thorns, and upon all bushes. In the same day shall the Lord shave with a razor that is hired, namely, by them beyond the river, by the king of Assyria, the head, and the hair of the feet: and it shall also consume the beard. (Isaiah 7:17-20).

Trust Egypt or the Lord

It was just a matter of time before Judah was overrun and the land stripped bare by the invading armies.

What were the people to do? Many wanted to turn to Egypt in the south and form a confederacy with the Egyptians but Isaiah warned:

But as the time drew near and Sennacherib occupied the land of Judah the level of fear increased and Isaiah said in chapter 10:

O my people that dwellest in Zion, be not afraid of the Assyrian: he shall smite thee with a rod, and shall lift up his staff against thee, after the manner of Egypt. For yet a very little while, and the indignation shall cease, and mine anger in their destruction. (Isaiah 10:24-25).

Who could the people believe? The people watched as one town after another a few miles north of Jerusalem fled before the advancing Assyrians: Aish, Migron, Michmash, Geba, Ramah, Gibeah, Gallim, Laish, Anathoth, Madmenah, Gebi “gather themselves to flee” (Isaiah 10:31). Sennacherib was now in sight of Jerusalem and could shake his fist over the city but the Lord said:

O my people that dwellest in Zion, be not afraid of the Assyrian… For yet a very little while, and the indignation shall cease, and mine anger in their destruction. (Isaiah 10:24-25). 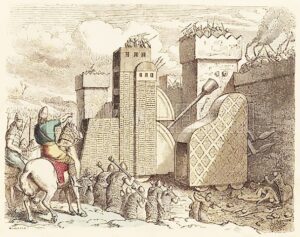 Faith was tested as they viewed the Assyrians massing on the heights north of the city and assembling their war machines in preparation for an assault on the city walls. Day after day refugees poured into Jerusalem.

Egypt and Assyria were two opposing nations vying for power. The land between Egypt and the Euphrates had been the domain of the King of Egypt and for Assyria to come south into Judah was encroaching on Pharaoh’s territory.

When Hoshea, the last king of Israel in Samaria had changed loyalty from Assyria to Egypt it resulted in Shalmaneser coming and besieging Samaria so the Lord said:

Woe to the rebellious children… That walk to go down into Egypt, and have not asked at my mouth; …Therefore shall the strength of Pharaoh be your shame, and the trust in the shadow of Egypt your confusion. (Isaiah 30:1-3).

Woe to them that go down to Egypt for help; and stay on horses, and trust in chariots, because they are many; and in horsemen, because they are very strong; but they look not unto the Holy One of Israel, neither seek the LORD!…Now the Egyptians are men, and not God; and their horses flesh, and not spirit. (Isaiah 31:1-3).

After the death of King Ahaz, Hezekiah reigned and Hezekiah had a heart for God no doubt greatly influenced by the preaching of Isaiah. He must have been living in great fear though of the threat of war as he witnessed the rise of Assyria and as nation after nation became subject kingdoms.

Israel had become a vassal kingdom to Assyria but in the 6th year of Hezekiah’s reign Hoshea the king of Israel had switched allegiance to Egypt and so the Assyrians returned and besieged Samaria in 722BC. Samaria was only about 50 km north of Jerusalem.

Sargon II, the brother of Shalmaneser, completed the capture of Samaria in 721BC and took away 27,290 prisoners and settled them in the cities of the Medes.

All of this was happening on Judah’s doorstep in the time of Isaiah. Later the Assyrians returned and took more of the northern kingdom away captive. It was only a matter of time before they would move south into the cities of Judah. Jerusalem would be attacked and the people scattered by the Assyrians. Yet Isaiah had said, “Sanctify the LORD of hosts himself; and let Him be your fear”.

When Sennacherib, the son of Sargon reigned he came with his armies and invaded the cities of Judah in fulfilment of Isaiah’s prophecy.

Hezekiah took all the precautions he could; he concealed the water supplies flowing into Jerusalem and then sent a present to Sennacherib who was warring against the city of Lachish. He stripped the Temple of all 300 talents of silver and 30 talents of gold and sent them to Sennacherib.

Sennacherib accepted the treasure and responded by sending his chief of staff to Jerusalem to tell them that he would come and that he would capture Jerusalem and take the Jews away captive. He warned them not to trust in the Lord because none of the gods of the nations were able to stand against him.

This was Sennacherib’s fatal mistake for when he boasted against the Lord he came under the judgment of God. God told Hezekiah that Sennacherib would

pass through Judah; he shall overflow and go over, he shall reach even to the neck; and the stretching out of his wings shall fill the breadth of thy land, O Immanuel (Isaiah 8:8-9).

But He told Hezekiah that Jerusalem would be spared. Jerusalem, high on Mount Zion, was the head of Judah and Sennacherib would be permitted to take all the cities right up to the neck – to Jerusalem.

Sennacherib was God’s instrument to judge Judah but once He had fulfilled his purpose on Judah, God would judge the King of Assyria,

Wherefore it shall come to pass, that when the Lord hath performed his whole work upon mount Zion and on Jerusalem, I will punish the fruit of the stout heart of the king of Assyria, and the glory of his high looks (Isaiah 10:12).

When Hezekiah prayed God answered. Isaiah was given a message for Hezekiah

concerning the king of Assyria, He shall not come into this city, nor shoot an arrow there, nor come before it with shields, nor cast a bank against it. By the way that he came, by the same shall he return, and shall not come into this city, saith the LORD. For I will defend this city to save it for mine own sake, and for my servant David’s sake. Then the angel of the LORD went forth, and smote in the camp of the Assyrians a hundred and fourscore and five thousand: and when they arose early in the morning, behold, they were all dead corpses (Isaiah 37:33-36).

Although Sennacherib was permitted to “fill the breadth of the land” he was judged in answer to Hezekiah’s prayer.

We too live in dark and difficult days. Let us remember Habakkuk’s prayer: