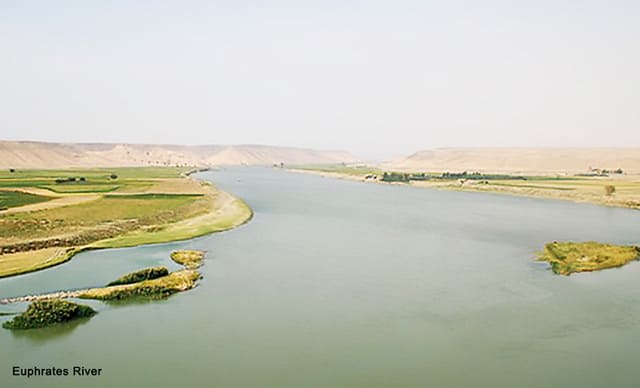 And the sixth angel poured out his vial upon the great river Euphrates; and the water thereof was dried up, that the way of the kings of the east might be prepared” (Revelations 16:12)

When John wrote the Book of Revelation in AD96 the River Euphrates was a mighty flood of water flowing from the snow-clad mountains of eastern Turkey through Syria and Iraq to the Persian Gulf; a journey of 2,800 km. The land through which the Euphrates passes is desert and depends on fresh snow water for irrigation and agriculture. The river has also had a fishing industry for the people of Turkey, Syria and Iraq.

Historians have referred to the Euphrates valley as the Fertile Crescent because of the rich farming that the river has supported but today things have changed. The river has been reduced to just a small flow and much of the river bed is now no more than mud flats.

The impact on the agriculture along the river is devastating. Crops have failed, fruit trees in orchards have died and fishermen catch only a few fish each day. The impact on the population has been catastrophic.

So how did this happen? The Climate Change ignoramuses immediately cry, Global warming! but is it really?

It is true that there has been a drought in the Middle East but the water that flows down the Euphrates is snow water from high up on the mountains of Ararat in Turkey. Much of Syria and Iraq is Arid land with only a few inches of rain each year. It depends entirely on the Euphrates. 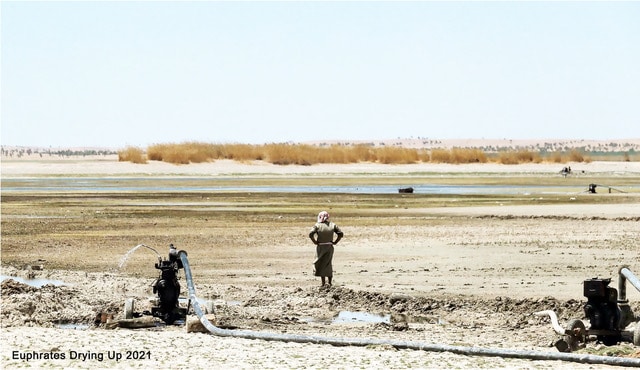 The River Nile is similar and flows through Egypt. Egypt has virtually no rain and never has. It is a desert country totally dependent on the water flowing from the snow-clad mountains 1,500 km to the south in Ethiopia where the Blue Nile has its beginning.

When John wrote the Book of Revelation he said that at the end of the Tribulation, when the 6th Vial is poured out, the River Euphrates would be dried up and he would have been criticized or even ridiculed. We can imagine how some would say, Well, it can’t be taken literally. The theological dreamers like Origen, would have found a “spiritual” interpretation that only the elite could understand.

But 2,000 years have passed and now the Euphrates is running very, very low so much so, that it is endangering the economies of Syria and Iraq. Food production has been reduced and agriculture is failing. And the levels could fail even further because the 22 dams in Turkey along the Euphrates and Tigris could shut down the flow of water completely and in any summer when there is no rain, the people will have no water in the river at all. Syria and Iraq could become another Sahara desert!

For us today it is a solemn reminder that we are living in the last days and the Coming of the Lord is near. John’s prophecy won’t occur until near the END of the 7 years of Tribulation so the Rapture is that much closer! It is a rebuke to those who spiritualize the Word of God and who refuse to believe that God said what He meant and meant what He said – literally. If you don’t know the Lord as your Saviour, it is time to call on Him to save you right now. You could be left behind for the Tribulation.