How Long will the Tribulation Last? 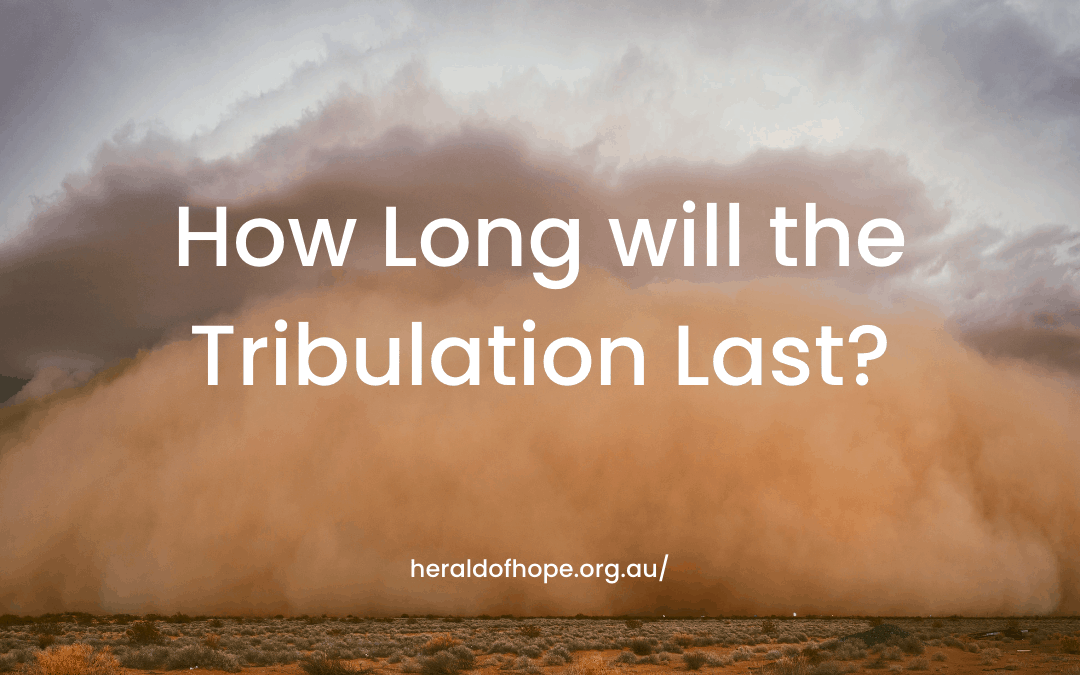 The Lord Jesus warned us about fixing dates for prophetic events. He stated:

But of that day and that hour knoweth no man, no, not the angels which are in heaven, neither the Son, but the Father. Take ye heed, watch and pray: for ye know not when the time is (Mark 13:32-33).

Yet as we read the prophecies of the Old and New Testament there are definite periods of time indicated. How can we reconcile these facts?

First a word of warning. When we read the times allocated for prophesied events we must stick rigidly to the units of time stated in Scripture. If the Bible says the period of time is days we cannot change it into years. Great blunders have resulted from those who adopted the “year-day” theory in an effort to calculate when the Lord would return.

The very fact that these people even want to calculate the date of the Lord’s return is a warning. Jesus said,

ye know not when the time is.

It is wilful disobedience to attempt to fix any date for the Lord’s return.

The Historicist school in the past has used the “year-day” theory and the cults have taken it up. We have the Seventh Day Adventists and the Jehovah’s Witnesses adopting the same year-day theory and this has lead to gross doctrinal error as they endeavour to dig themselves out of the hole they created.

Israel and the Church

It is of the utmost importance to recognize the prophecies given to Israel as distinct from those given to the Church.

We live in the Church Age beginning at Pentecost AD32. The Church Age will conclude with the Rapture of the Church and there is not one date that can fix the time of the Rapture. We know that the “fulness of the Gentiles” must come into the Church before the Rapture. The Body of Christ must be complete and when the last soul is reaped the Rapture will occur. God the Father alone will determine that moment.

What we do know is that immediately after the Gentile Bride of Christ has been raptured Israel will again come into focus and the ungodly nation will sign a 7-year treaty (Daniel 9:27) with a Roman (EU) prince. We also know that soon afterwards, “all Israel shall be saved” (Romans 11:26) and all the prophecies of the last days will begin to run their course.

The trigger that sets in motion all of these prophecies is the Rapture of the Church and until the Rapture occurs it is futile for men to calculate specific dates. However after the Rapture the schedule of last-days events will be set in motion. Believing Israel will see the foretold events unfolding before their eyes and will know exactly when the Lord will appear in the heavens to deliver them from the Antichrist and his armies.

Events After the Rapture

What are these events that will be understood by Israel after the Rapture? They are as follows:

1) The ungodly leaders of Israel will confirm a pact with the Revive Roman Empire (EU) for seven years. We don’t know what the pact involves. It may be a security agreement or some other pact. It could be to supply the EU with oil and gas for 7 years. The Bible does not say. It may be confirmation of a former agreement.

The vast oil and gas reserves located in the Mediterranean are being linked to the EU by a pipeline and Israel’s security is threatened by Iran, so it could be either.

This covenant fixes the duration of the Tribulation at 7 years for after the 7 years Israel will be blessed in Christ’s kingdom (Daniel 9:24).

2) Immediately after the Rapture there will be many Jews who know the Scriptures and will turn to Jesus Christ. Two special prophets will be located at Jerusalem and will prophesy at a rebuilt Temple. We know they will prophesy for 1,260 days (Revelation 11:1-3) and be martyred when the Beast moves into Jerusalem half-way through the 7 years. The number of Jewish men from all over the world who will be converted and preach the Gospel of the coming kingdom is given as 144,000 (Revelation 7:4) or one preacher for every 50,000 worldwide. These Jewish preachers will suffer martyrdom and by the mid-point of the 7 years will be gathered around the throne in heaven (Revelation 14:1-5).

3) During the first half of the 7 years the nation of Israel must be converted to Christ and this will occur when Russia and her Islamic allies sweep down from the north as described by Ezekiel (Ezekiel 38/39) and by Joel (Joel ch.2).

We know that this must occur in the first half of the 7 years because it is at the Russian invasion that Israel will seek the Lord. We read:

So the house of Israel shall know that I am the LORD their God from that day and forward (Ezekiel 39:22).

The Russian invasion could be about the 2nd year of the 7 years of Tribulation because after God destroys the invading armies the nation spends 7 months burying the dead. They would not be able to do this after the Beast moves into the Temple at the mid-point of the 7 years because Jesus said they will have to flee into the mountains at that time (Matthew 24:16).

the commandments of God and have the testimony of Jesus Christ (Revelation 12:17).

If Israel is not converted until the end of the 7 years they could not have the testimony of Jesus Christ at the mid-point! Also if they were still an ungodly nation when the Beast takes over there would be no reason to persecute them in the second half of the 7 years. Ezekiel prophesied that the false shepherds of Israel will perish at the Russian invasion (Ezekiel ch.34). The Russian invasion does two things:

i) Two thirds of the nation perish in the land and

ii) the remaining one third all turn to Christ (Zechariah 13:9).

It is when Israel is in danger of total destruction that the priests will blow the trumpet and call the people to repentance (Joel 2:15-17) and God will pour out His Holy Spirit upon the nation (Joel 2:28).

Israel will be waiting for the Lord when He returns for we read:

4) The Beast begins his global reign at the mid-point of the seven years (Daniel 9:27) and he rules for 42 months (Revelation 13:5) before he is destroyed at the coming of the Lord “immediately after the tribulation” (Matthew 24:29; 2 Thessalonians 2:8).

Daniel confirms the global reign of the Beast is 3 1/2 years in his vision of the four beasts representing the “times of the Gentiles”. The last ruler of the Roman Empire is described as a “little horn” who

Those three and a half years will be the time when Israel has to fight for survival (Zechariah 12:6) in a place that God has prepared for them.

And the woman fled into the wilderness, where she hath a place prepared of God, that they should feed her there a thousand two hundred and threescore days (1,260 days) (Revelation 12:6).

5) Daniel again prophesied the final 7 years before the Lord returns in chapters 11 and 12 of his prophecy. Chapter 11:36 to 45 describes the conflicts of the first half of the Tribulation and chapter 12 describes the second half. Daniel sees his people suffering and one asks

How long shall it be to the end of these wonders? And I heard… that it shall be for a time, times, and an half; and when he shall have accomplished to scatter the power of the holy people, all these things shall be finished (Daniel 12:6-7).

Again Daniel affirms that Israel’s suffering in the second half of the Tribulation is 3 1⁄2 years.

The Reason for the Tribulation

The purpose of the Tribulation is twofold. First and foremost it will be used of God to bring Israel to acknowledge Jesus Christ as her Messiah and Saviour. Two thousand years years of denial will come to an end when the Russian/ Islamic hordes invade like a “cloud to cover the land” (Ezekiel 38:9).

The evil shepherds (leaders) will be eliminated and the remnant will seek the Lord. The issues will be crystal clear. The 144,000 Jewish men who repented at the Rapture will understand the prophetic Scriptures and spell out the significance of the Russian invasion. Israel’s spiritual blindness will cease and though persecution will be intense, worldwide the remnant will rejoice in the fires of affliction as Isaiah indicated:

When thus it shall be in the midst of the land among the people, there shall be as the shaking of an olive tree, and as the gleaning grapes when the vintage is done. They shall lift up their voice, they shall sing for the majesty of the LORD, they shall cry aloud from the sea. Wherefore glorify ye the LORD in the fires, even the name of the LORD God of Israel in the isles of the sea” (Isaiah 24:13-15).

Israel is God’s Olive Tree and Vine and even amidst the fires of persecution the nation will rejoice at the prospect of her soon-coming Messiah and King.

Special protection will be provided by God for this faithful remnant and all who seek her destruction will suffer. There will be saved Gentiles who will support God’s people and many of these will survive to go into Christ’s kingdom.

The second reason for the Great Tribulation will be to judge the nations of the world.

Fear, and the pit, and the snare, are upon thee, O inhabitant of the earth. And it shall come to pass, that he who fleeth from the noise of the fear shall fall into the pit; and he that cometh up out of the midst of the pit shall be taken in the snare: for the windows from on high are open, and the foundations of the earth do shake. The earth is utterly broken down, the earth is clean dissolved, the earth is moved exceedingly. The earth shall reel to and fro like a drunkard (Isaiah 24:17-20).

There will be no escape from the wrath of God in the Day of the Lord for those who reject God’s mercy:

They shall be gathered together, as prisoners are gathered in the pit, and shall be shut up in the prison, and after many days shall they be visited. Then the moon shall be confounded, and the sun ashamed, when the LORD of hosts shall reign in mount Zion, and in Jerusalem, and before his ancients gloriously (Isaiah 24:22-23).

The victory will be the Lord’s. He will reign as King of kings and Lord of lords for 1,000 years!