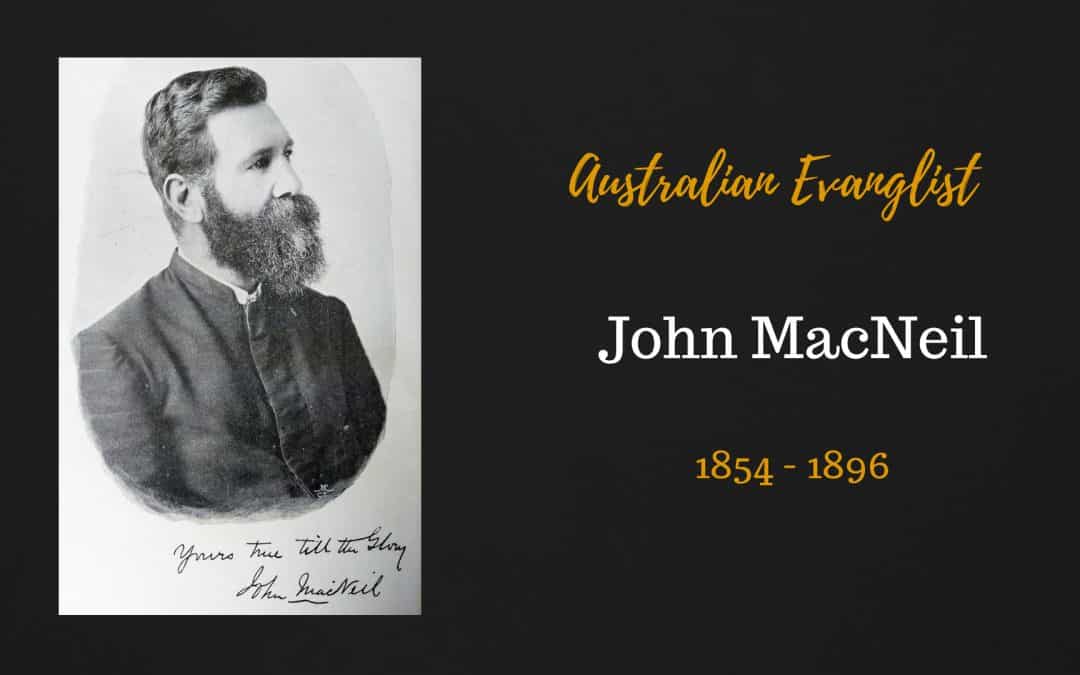 I had never heard of Evangelist John MacNeil until a brother in Victoria contacted me recently and sent me a Bible Prophecy chart that this godly Presbyterian preacher prepared about 1896.

John MacNeil came from Scotland and was appointed State Evangelist by the Presbyterians in Victoria. When a call came from Western Australia in 1894 to preach the Gospel in the rapidly growing goldfields, John answered the call. He tells how he preached in the streets of mining towns to 1,000 men for an hour and a half and to hundreds in a Wesleyan Church. After he had preached, MacNeil would continue an “after meeting” in which he pleaded with those who were deeply concerned for their soul’s salvation.

MacNeil spent many hours riding a bicycle over hot and dusty roads to take the word of life to miners’ camps, distributing Bibles and Gospel tracts into their tents. When he returned to Victoria he left behind churches that had been established through his preaching.

John MacNeil preached powerfully the truth of the Lord’s return and during a preaching tour of Queensland, drafted a small book entitled, “Some One is Coming.” The outer sheet contained only one word, Preface, and was dated “Cooktown, June 17, 1896.” The manuscript was sent to his good friend, H.B. Macartney, the Anglican minister at St. Mary’s Caulfield, Victoria for review.

John MacNeil’s wife Hannah was expecting him home from Queensland on the 4th September 1896 and his final meeting was in Brisbane on 26th August. On the morning of the 27th August, John MacNeil suddenly passed into the presence of his Lord; his body was embalmed and sent to Victoria for burial.

Wherever John went he preached the return of Jesus Christ. He believed Jews would return to the land in unbelief and that the Christians would be Raptured before seven years of great Tribulation after which, Christ would return in glory to reign over the earth for 1,000 years. John MacNeil lived in the constant expectancy that Christ might come for His Church at any moment.

What is most amazing is the accuracy of John MacNeil’s understanding of Bible Prophecy in the time he lived. He died in 1896, one year before the First Zionist Congress in 1897 when Theodore Herzl launched the move to establish a national home for Jews, yet he fervently preached, as did Bishop JC Ryle in Scotland (1867), that the Jews would return and be established in the land in the last days.

Israel’s return in unbelief is now fulfilled prophecy but was future prophecy when John MacNeil preached.

Those who constantly harp that the premillennial teaching was the work of JN Darby are either ignorant or liars for it is evident that the premillennial truth was widely preached. Anglicans, Presbyterians, Baptist Churches had a very clear understanding of the entire prophetic plan as described in the Book of Revelation. Ryle was a street- preaching Anglican, MacNeil was Presbyterian, HB Macartney, who wrote the Introduction to MacNeil’s book, “Some One is Coming”, was an Anglican. CI Schofield was Congregational and there were many Brethren preachers that could be named.

It is likely that the great second advent preacher, William Lamb, of Burton Street Baptist Tabernacle, whose paper, The Advent Herald preceded the Herald of Hope magazine, would have been influenced by John MacNeil. Lamb was in Victoria where MacNeil preached for some time after his conversion to Christ.

It is clear that wherever men interpret Scripture literally they can only come to one conclusion. The Bible can’t be interpreted in a dozen different ways!

John MacNeil’s funeral service was deeply moving for his wife and children and for the large crowd that attended. When John’s book was published, Hannah, his wife, penned the unfinished Preface and it is so touching we have printed it on the next page. The prophetic chart from his book is reproduced on the following page.

May God raise up men of the same ilk in these final days of this Church age. We need men who are willing to spend time in the Word, who are willing to put other things aside so that they can become competent in the truth of the Lord’s return. Christ is at the very door, the Church is asleep and the world is about to face the greatest holocaust in history. Where are the heralds of the Cross and the Crown? If ever the world needed committed and consecrated men it is in these last days.

Preface to “Some One is Coming”

by the widow of John MacNeil; Hannah MacNeil

To say even these few syllables is to me a very difficult matter. The hand that wrote that single word, (Preface), at the heading has been called to drop the pen, and now, instead of writing about his Master, my husband sees Him face to face, – saying, I doubt not, over and over again, “the half was not told me!”

We can only imagine what he would have written on this empty page; but I believe that, could he send one message to us now, we should hear his voice ringing down from the gates of the city, “Watch, Watch, Watch”.

For many years he had been living in expectation of the coming of the “Some One” Whom it was the joy of his heart to herald; but latterly this expectation had been growing in intensity, and it was laid upon him to witness in every place that “the Lord is at hand.”

His own life was a sufficient answer to the objection, that to hold the truth, “cuts the nerve of effort.” He used often to say, “I do not expect to die, but if I have to, I intend to be ready;” but when he sang his last hymn,

“I hear thy welcome voice
That calls me Lord to Thee,”

he was utterly unconscious of the glad surprise that awaited him the very day after, and of the fact his next song would be, “Worthy is the Lamb that was slain to receive power, and riches, and wisdom, and strength, and honour, and glory, and blessing.”

Although he did not know that his departure was so near, he was nevertheless “quite ready.” God grant that we may all be “ready” too, whether for our “going” or for His “coming.” 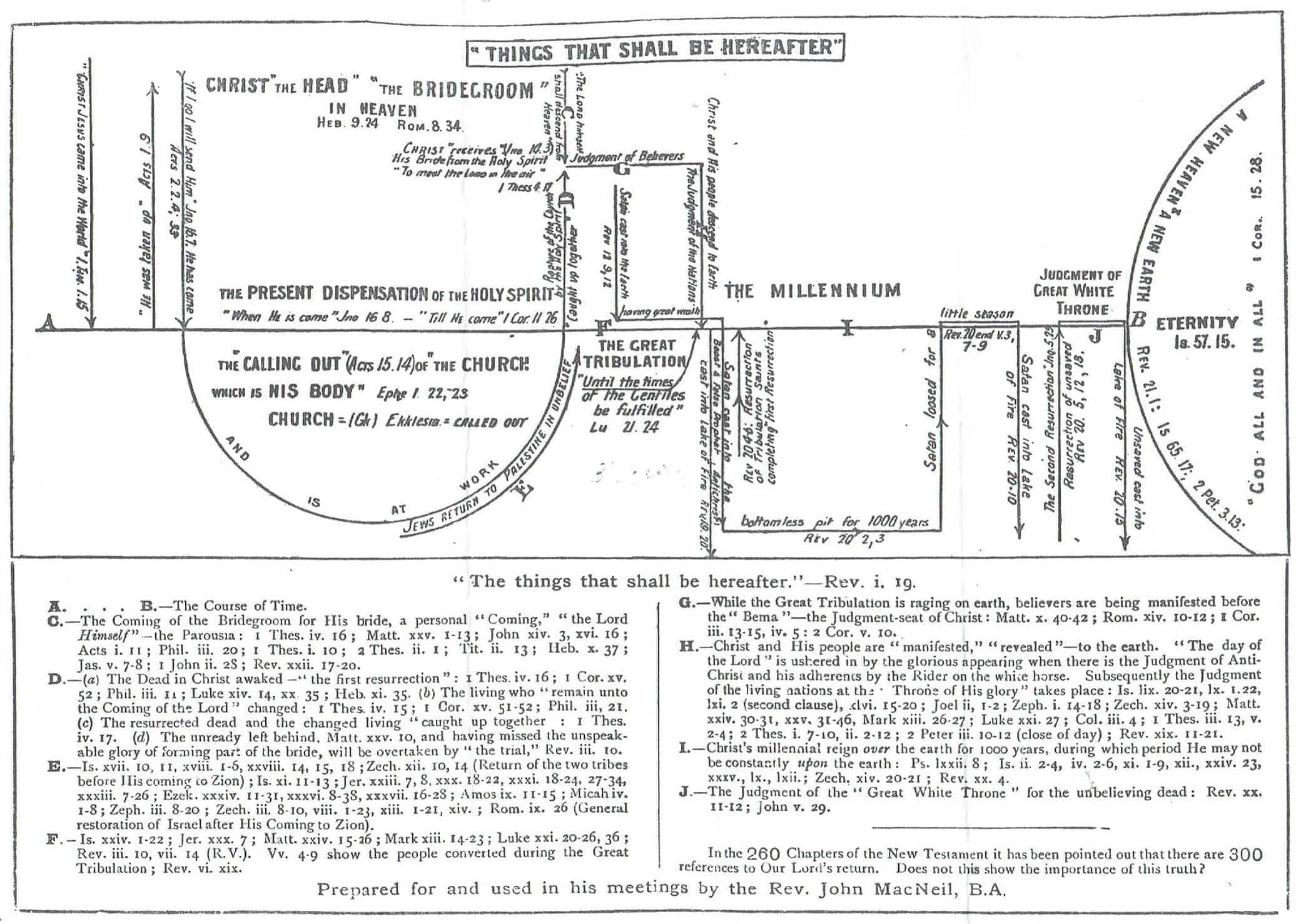