O Jerusalem, Jerusalem… How oft would I have gathered thy children…! 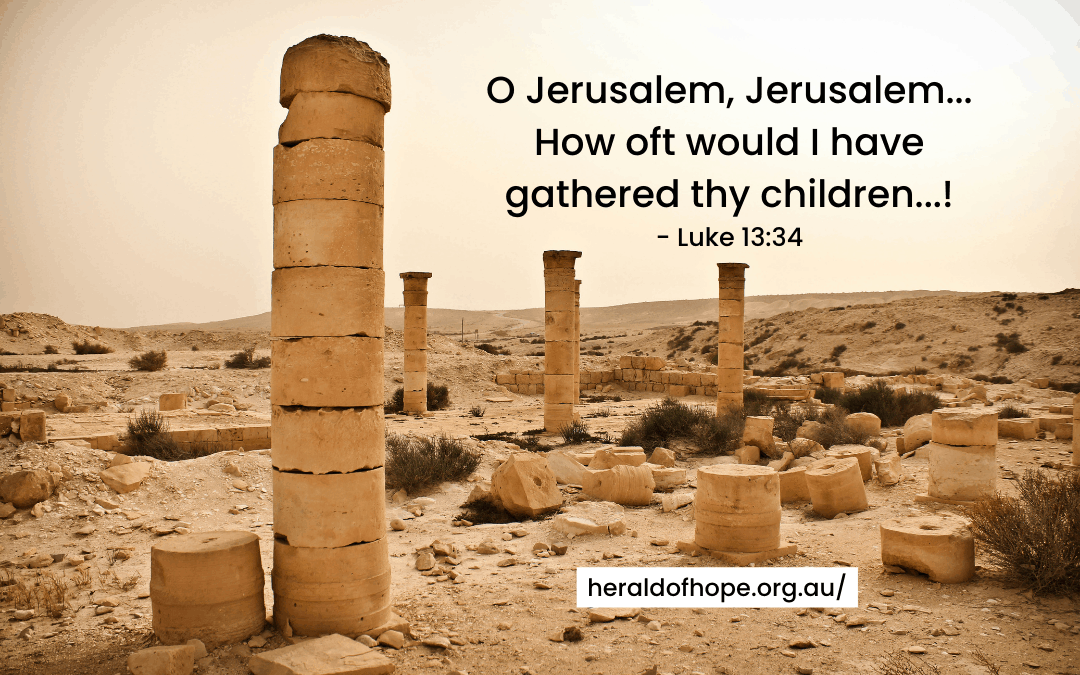 Jesus warned the Jews of the great calamity that lay ahead. He foresaw the terrible desolations that would come upon Jerusalem and He warned the nation that

Five times in history the city of Jerusalem had been occupied by enemy forces and twice it was desolated: first by Nebuchadnezzar in 586BC and then by Titus in AD70.

Each time the Temple was burned on the same day of the year: the 10th day of the month Av. The destruction of the Temple by Titus was described by Josephus in his history of The Wars of the Jews. (Book 6, chs 4 to 10).

Though the mills of God grind slowly, yet they grind exceeding small; Though with patience He stands waiting, with exactness grinds He all.

No nation has been more blessed than Israel and yet they have repeatedly turned away from the God of Abraham, Isaac and Jacob only to suffered the most horrific judgments, not only at the hands of their enemies but at the hands of fellows Jews.

Following the nation’s rejection of Messiah in AD32 the Jews revolted against their Roman masters in AD66 over the payment of taxes. This began a long war that finished in the destruction of Jerusalem and the Temple in AD70 as described in the Palestinian Covenant.

The Jews claimed to adhere to the Law of Moses so surely they must have understood that the Palestinian Covenant had been partially fulfilled in the Babylonian Captivity. And if the Babylonian Captivity had been so accurately foretold, then the Roman Captivity was inevitable. The blindness of the nation prophesied by Isaiah (Isaiah 6:9- 13) could be the only explanation for such attempts to overthrow the Roman power. When men set themselves up against God they become blind to their own fate and hasten to their own destruction.

Go, and tell this people, Hear ye indeed, but understand not; and see ye indeed, but perceive not. Make the heart of this people fat, and make their ears heavy, and shut their eyes… Then said I, Lord, how long? And he answered, Until the cities be wasted without inhabitant, and the houses without man, and the land be utterly desolate (Isaiah 6:10-11).

The blindness of the Jews to the danger they faced was apparent. The Jewish Robbers and Zealots retreated from the countryside into Jerusalem and the Zealots occupied the Temple site under the leadership of John. Simon and Eleazar lead factions in the city and before the Roman siege began the Zealots invited 20,000 Idumeans (Edomites) into the city to strengthen their forces. When the Idumeans became weary of slaughtering Jews they left and offered to fight for the Romans.

The loss of life in AD70 is hard to comprehend. Josephus says that 1,100,000 Jews were slain in Jerusalem and 97,000 were taken captive only to die as spectator sport: torn asunder by wild beasts; burned alive, or compelled to fight to the death in the stadiums. Others were sent to work in the Egyptian mines (Deutoronomy 28:68) while those under 17 were sold as slaves. Some were sent to Rome for execution. 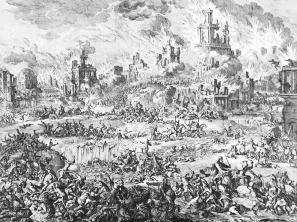 Some days 500 Jews were crucified outside the walls of Jerusalem to convince the Jews to surrender but those who tried to escape had their throats cut if caught by the Jewish guards. Within the walls civil war raged, houses and food stored for the siege were burned. Bodies were not buried and women ate their own children. Slave markets were flooded and the price of slaves dropped.

The words of Jesus were fulfilled:

And… he beheld the city, and wept over it, Saying, If thou hadst known, even thou, at least in this thy day, the things which belong unto thy peace! but now they are hid from thine eyes. For the days shall come upon thee, that thine enemies shall… lay thee even with the ground, and thy children within thee; and they shall not leave in thee one stone upon another; because thou knewest not the time of thy visitation (Luke 19:41-44).

Josephus was a Jewish priest as was Jeremiah, and he was appointed General of the Jewish forces against the Romans in Galilee. At first he had great success. When the Romans brought the Syrian Legion and its Auxiliaries into the land to put down the uprising it was ambushed and 6,000 men were slain. Legions normally numbered about 6,000 men so the Roman Legion was virtually wiped out!

Josephus was so successful that his capture became a prize and the Romans wanted to send him to Rome for the victory march before Nero after which he would die, possibly by crucifixion in the stadium at the Emperor’s pleasure.

Nero appointed his best General, Vespasian, to quell the uprising and sent with him two Legions. His son Titus brought another two Legions from Egypt.

Vespasian had led the invasion of Britain for Claudius Caesar in AD43 and fought 30 battles bringing Britain under Roman control. He was an older man with much experience.

At the beginning of his campaign Vespasian went about systematically destroying the fortresses set up in the north of the country by Josephus.

The people in these cities often did not want to rebel but the fanatical Jews known as Robbers occupied the cities slaughtering and plundering the people. These occupied the fortified towns and refused any offers of peace made by the Romans. As each city in the north of the country fell to the Roman Legions these Robbers withdrew to Jerusalem leaving innocent people to perish in the conflict that ensued.

Gamala was one of the fortress cities situated at the southern part of the Golan overlooking the Sea of Galilee. It was finally captured during the siege of Jotapata close to Cana of Galilee and it was at Jotapata that Josephus was captured.

Vespasian was so impressed by the leadership and bravery of Josephus that he gave orders for him to be taken alive and sent to Nero. When the city fell, Josephus hid in a dungeon and only came out at night to seek a way of escape but the Roman guards were everywhere.

Josephus’ men chose to die rather than surrender but Josephus wanted to put his life in God’s hands and surrender. He believed that God was sending him to Vespasian.

When he told his men of his intention to surrender they considered him a coward and would have killed him but they agreed to draw lots as to who should die first. Finally there were only two remaining – Josephus and one other and he convinced the other man not to take his life.

Josephus was a Jewish prophet. The gift of prophecy was still available before the Scriptures were completed by the Apostle John. Josephus knew the prophecies concerning Jerusalem’s destruction and when brought before Vespasian he said: 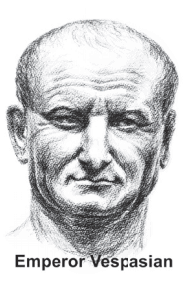 Thou, O Vespasian, thinkest no more than that thou hast taken Josephus himself captive; but I come to thee as a messenger of greater tidings; for had not I been sent by God to thee, I knew what was the laws of the Jews in this case, and how it becomes generals to die. Dost thou send me to Nero! For why?… Thou, O Vespasian, art Caesar and emperor, thou, and this thy son. Bind me now still faster, and keep me for thyself, for thou, O Caesar, art not only lord over me, but over the land and the sea, and all mankind; and certainly I deserve to be kept in closer custody than I am now in, in order to be punished, if I rashly affirm anything of God. (Wars of the Jews Book 3,Chapter 8).

At first Vespasian did not believe him but when Josephus said he had also prophesied that Jotapata would fall on the 47th day of the siege and it had, Vespasian confirmed that Josephus had indeed prophesied this to his people and was thereby convinced that he was a messenger from God.

Nero committed suicide on 9June AD68 and there were three contenders: Galba, Otho and Vitellius. All three died in the civil war and Vespasian was proclaimed Emperor in July AD69. Before Vespasian departed for Rome he ordered that Josephus be freed and that no record be kept of his captivity. He was later given land at Jerusalem and a pension.

It was by Divine Providence that Josephus was so treated for it meant that a complete record was kept of the destruction of Jerusalem by the Romans in fulfilment of the Palestinian Covenant – also the fulfilment of the prophecies of the Lord Jesus Christ concerning the destruction of the Temple and the scattering of the nation of Israel. Throughout the Roman campaign Josephus continued as advisor and interpretor to Titus and as such was an eye witness of those momentus events. During the siege of Jerusalem he appealed to the Jews to surrender.

Was Josephus a Christian?

In his book, Antiquities of the Jews Josephus wrote: 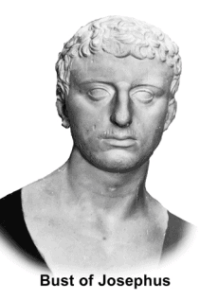 Now, there was about this time Jesus, a wise man, if it be lawful to call him a man, for he was a doer of wonderful works… He was [the] Christ; and when Pilate, at the suggestion of the principal men amongst us, had condemned him to the cross, those that loved him at the first did not forsake him, for he appeared to them alive again the third day, as the divine prophets had foretold these and ten thousand other wonderful things concerning him; and the tribe of Christians, so named from him, are not extinct at this day. (Antiquities, Book 18, ch 3).

The reader can judge. Josephus believed Jesus was more than a man; the Christ; that He died and rose on the third day from the dead in fulfillment of the prophecies of the Old Testament. He believed that Herod lost his throne for beheading John the Baptist.

Many believe that Josephus was just an Ebionite Jewish Christian like those at Galatia who thought they could be justified by the deeds of the Law and not by faith in Christ alone and that it wasn’t until later in life that he became a “Catholic Christian.”

The term “Catholic” must be understood in the sense of universal and not Roman Catholic. It was used to distinguish between Ebionite and other Christians.

Some believe that Josephus became the Bishop of the Church at Jerusalem in his latter years and was known as Joseph; one of those Bishops was named Joseph.

God knows the hearts of all men and if Josephus was a genuine believer in the Lord Jesus then we will see him in the glory. In any case, we have much to thank him for in preserving the fulfilment of the words of Christ concerning the destruction of Jerusalem and the scattering of the Jewish people during this Church Age. His testimony is external evidence of the Gospel of Christ and his Antiquities of the Jews, written for the Greeks and Romans, traces the Biblical record from the beginning of time. It provides many insights into historical events in the Old Testament. The English translation of his writings is available in four volumes published by Baker Book House.