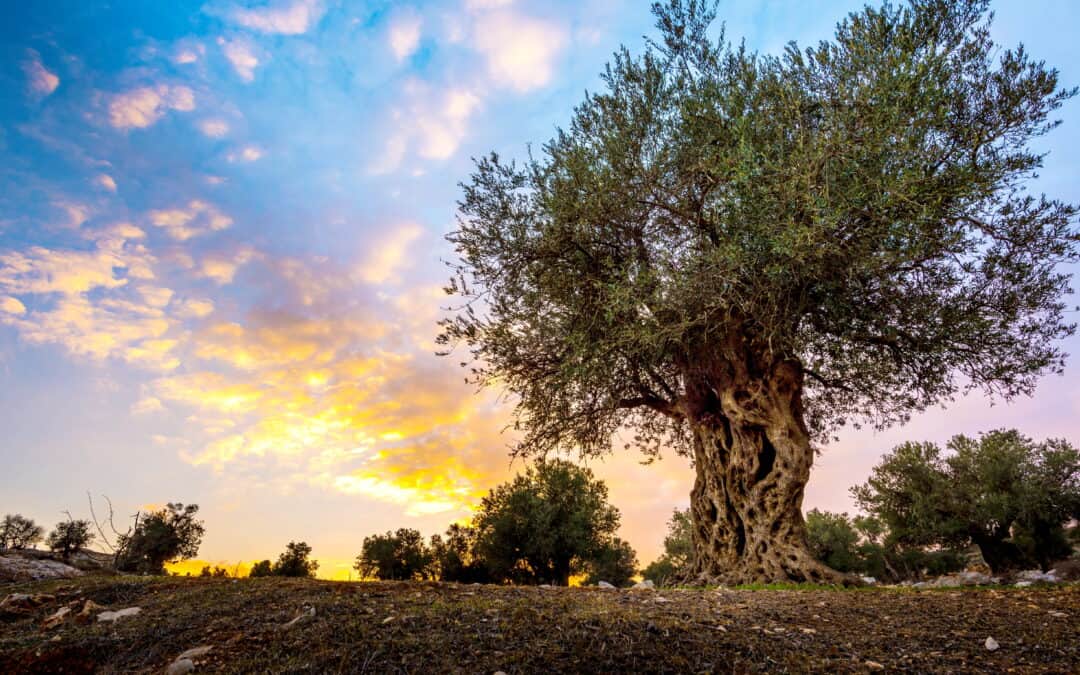 All the circumstances surrounding the death of the Lord Jesus were controlled by God. God chose the place of His Son’s death on “one of the mountains…in the land of Moriah” (Genesis 22:2). He chose crucifixion so that “they pierced His hands and feet” (Psalm 22:16). Men “parted His garments and cast lots for His vesture” (Psalm 22:16). The final hours were all planned by God as the Lord of glory, the great I AM, took His disciples into Gethsemane where He, “knowing all things that should come upon him, went forth” (John 18:4) to meet the band of soldiers led by Judas. The plan that began in the Garden of Eden was fulfilled in the Garden of Gethsemane.

The garden was called Gethsemane because it means “olive press”. It was an olive grove and there was an olive press there where the olives were crushed to extract the oil. It was located just across the brook Cedron where the blood of the sacrifical lambs flowed out from the Temple. It was fitting for the Lamb of God to pass over the blood of those sacrifices as He, as the Lamb of God, went to shed His own blood for the sins of the world.

But Jesus’ death was not the end. As the greater Israel and Prince with God, He was cast into the olive press in those three dark hours on the cross, to be crushed beneath the wrath of God. There He, “his own self bare our sins in his own body on the tree, that we, being dead to sins, should live unto righteousness: by whose stripes ye were healed” (1 Peter 2:24). God’s wrath on our sins was exhausted in the olive press but from that press flowed the oil of the Holy Spirit.

During the final hours of the Lord’s ministry, again and again , Jesus told His disciples that He was to leave them and that He would send the Holy Spirit, the Spirit of Truth, and He would abide with us for ever. After He rose He breathed on the disciples and commanded them to “receive ye the Holy Ghost” (John 20:22). Then at Pentecost, the Holy Spirit was sent to permanently indwell believers and the oil from the olive press was released into the world through the conduit of the Church just as it was through Haggai and Zechariah when they returned from Babylon to rebuild the Temple and were seen as two olive trees supplying oil for the seven golden candlesticks to maintain Divine testimony. The word of the Lord to Zerubbabel was,

Not by might, nor by power, but by my Spirit, saith the LORD of hosts (Zechariah 4:6).

In the near future when repentant Israel returns to the Lord in the first half of the Tribulation, again God will pour out His Spirit on Israel and the nations as Joel prophesied:

It is the work of the Holy Spirit to glorify Christ and He can only bless those who have received the grace that flowed from the olive press at Calvary. Without the olive press there could be no olive oil and without the atoning substitutionary death of the Lord Jesus on dark Calvary there could be no eternal life, no indwelling Holy Spirit to seal us unto the day of redemption.

The Winepress of the Wrath Of God

In scripture we read of the “winepress of the wrath of God”. Winepresses were different to olive presses. The wine press consisted of two vats carved out of the rock. There was a higher vat into which the grapes were thrown before men trod down the grapes and the juice ran out into the lower vat. After God had sent the Babylonians to carry away the children of Israel from Jerusalem, Jeremiah lamented,

That was not the last time God will tread the winepress. There is coming a day when Christ, who endured the Divine olive press, will come to tread down the nations in the winepress of the wrath of God. Joel prophesied of that fearful day

Let the heathen be wakened, and come up to the valley of Jehoshaphat: for there will I sit to judge all the heathen round about. Put ye in the sickle, for the harvest is ripe: come, get you down; for the press is full, the fats overflow; for their wickedness is great. Multitudes, multitudes in the valley of decision: for the day of the LORD is near in the valley of decision. The sun and the moon shall be darkened, and the stars shall withdraw their shining. The LORD also shall roar out of Zion, and utter his voice from Jerusalem (Joel 3:12-16).

It will be the Lord Himself who will tread that winepress and it will be the Christ-rejecting ungodly of this world who are the grapes. The nations today are shaking their fist in the face of God. Many just ignore Him to pursue their worldly lifestyle. The communist ‘left’ are denying He even exists. More and more we see violence, immorality, beastiality, genocide of the unborn, drug addiction and obsession with the pleasures of sin. We live in days like the days of Noah when

every imagination of the thoughts of his (mans) heart was only evil continually (Genesis 6:5)

There has to be a day of reckoning. The longsuffering of God must end and it will do so with the return of Jesus Christ. Because Jesus bore the punishment for all human sin, God “has committed all judgment unto the Son” (John 5:22). The One who was crushed beneath the wrath of God on the cross; crushed in God olive press, will one day appear in glory to crush the nations in the winepress of the wrath of God. John described that day:

And out of his mouth goeth a sharp sword, that with it he should smite the nations: and he shall rule them with a rod of iron: and he treadeth the winepress of the fierceness and wrath of Almighty God (Revelation 19:15).

Isaiah saw a future day when the Lord would tread the winepress alone (Isaiah 63:1-4). The land of Israel will become a winepress where the blood will flow to the horses bridles:

And the winepress was trodden without the city, and blood came out of the winepress, even unto the horse bridles, by the space of a thousand and six hundred furlongs (Revelation 14:20).

Joel says that the winepress will be the “valley of Jehoshaphat” where Jehoshaphat found the armies of the Edomites, Moabites and Ammonites all dead. When they came against Israel God sent confusion and every man’s sword was against his brother. It took Jehoshaphat four days to gather the spoils and he called the valley “Berachah” meaning “blessing”.

There they blessed the LORD: therefore the name of the same place was called, The valley of Berachah, unto this day (2 Chronicles 20:26).

The day of God’s vengeance will also be a day of blessing for Israel and all who put their trust in the Lord.

the day of vengeance is in mine heart, and the year of my redeemed is come (Isaiah 63:1-4).

There is a choice to be made. Either accept the One who was crushed under the load of our sin on the cross; in the olive press of God’s wrath, or one day be cast into the winepress of the wrath of God.

Whosoever shall call upon the name of the Lord shall be saved (Romans 10:13)