Perils of the Sea 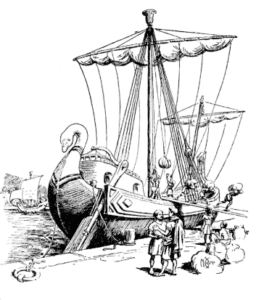 Paul experienced some rough times on his journeys as a servant of Jesus Christ. His final trip to Rome was under armed guard who, when they were about to abandon a sinking ship wanted to kill him to prevent an escape. This was after 14 days being tossed about in a storm so bad that they could not eat a meal either because of the movement of the ship or because of sea sickness.

The ship Paul was on fortunately was about the largest of his time. The Alexandrian wheat ships were about 55 metres (180 ft) in length and had a beam of more than a quarter of that. From the deck to the bottom of the cargo hold was 13 metres (43 ft). The cargo capacity was estimated at 1200 to 1300 tonnes of grain. A smaller ship would have been in an even worse predicament and probably would not have survived the storm. One seafarer tells the story of how he survived in a storm at sea in a 20 meter fishing boat. He wrote:

The main factor is the weather. If you get caught in bad weather you will be thrown around so badly that your skill will be largely irrelevant. Its more about perseverance. Skill is mostly about keeping you out of these situations in the first place.

Assuming your boat doesn’t capsize or get swamped by a wave, its a matter of outlasting the sea. In some cases this means days of getting thrown around while the vessel is on autopilot and going nowhere, something they call “jogging”. You don’t get to sleep, you can’t cook food, you are totally exhausted and frequently become airborne and slam into things. You can’t lay in a bed because you will get launched out of it. I have literally smashed into the ceiling mid-sleep on several occasions, only to wake up with the realization that I am now falling to the ground and trying to figure out a way to protect myself.

The storm that overtook Paul’s ship was indeed severe for as soon as the winds began the order was given to “strake sail and so were driven” (Acts 27:17). There was no possibility of sailing out of this storm and the ship was entirely at the mercy of the wind and waves.

After 14 days of being thrown about by the winds and waves, unable to eat a meal, the ship had to lighten its cargo and unload into the sea the wheat that it was taking from Egypt to Rome. So Paul told everybody to have something to eat. Then they lightened the ship and shovelled the wheat cargo overboard. A ship of this size would carry up to 1,200 tons of wheat and the task of shovelling it overboard in a storm would have been a mamoth task. It would be hard enough to keep on your feet let alone shovel 1,200 tons of wheat overboard! Paul wrote:

And we were in all in the ship two hundred threescore and sixteen souls. And when they had eaten enough, they lightened the ship, and cast out the wheat into the sea (Acts 27:37-38).

The ship was in shallow waters and had dropped anchor to prevent it crashing into the rocks. When the seamen tried to escape in the lifeboats Paul told the Centurion to stop them so they cut the ropes. The angel of God had stood by Paul that night and God had assured him that everybody would be safe but they must follow His instructions. So they hoisted the sail, pulled up the anchors, loosed the rudder and let the ship go where God would send it.

The wind and the waves took the ship to a place where two seas met and the ship stuck fast in the sand. Paul then told everybody to swim ashore on whatever they could find and the ship broke up behind them. This had to be a Divine rescue and every man on board was safely brought to land. God used the storm to glorify His name before the 276 men on board and He brought Paul to the island of Melita where he preached the Gospel and saw many healed miraculously for 3 months.

The LORD is slow to anger, and great in power, and will not at all acquit the wicked: the LORD hath his way in the whirlwind and in the storm, and the clouds are the dust of his feet… The LORD is good, a strong hold in the day of trouble; and he knoweth them that trust in him (Nahum 1:3,7).

It is God who sends the storms of life and He never loses control. In fact He has a purpose in every storm and as we obey Him, He stands by us in the night seasons to reassure and deliver us. His purpose is to bring glory to His name and to bless others through our experience. It is very often the way God works with us just as He did for Paul.