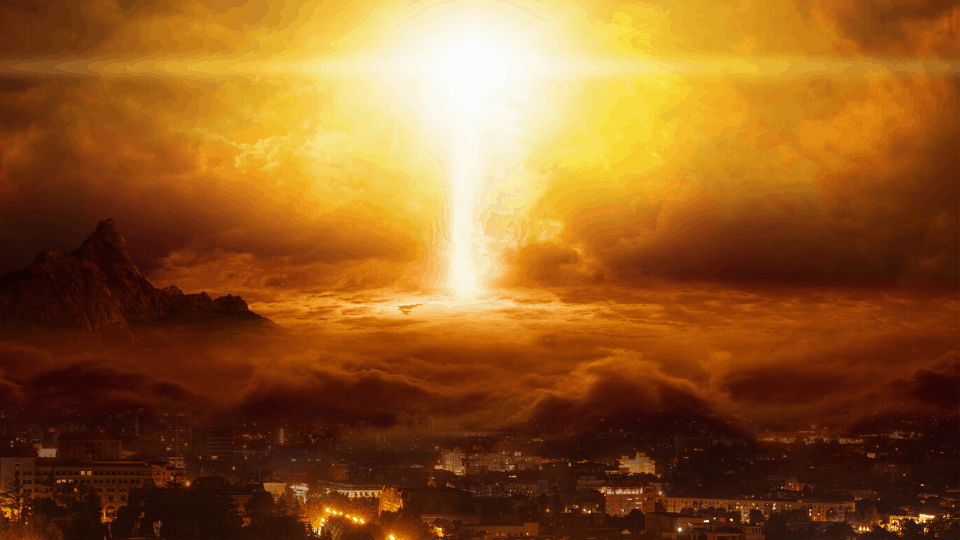 Premillennialists hold to the view that when Christ returns to reign from Jerusalem, Israel will be the leading nation, Satan will be bound in the Bottomless Pit for 1,000 years, and the earth will experience great blessing.

Immediately after the tribulation of those days…shall appear the sign of the Son of man in heaven (Matthew 24:29-30).

This Tribulation is described in detail by Christ in Matthew 24:7-28 and Revelation chapters 6 to 18 and will, according to Daniel’s prophecy (Daniel 9:24-27), last for 7 years during which time Israel will be brought to repentance, welcome Jesus Christ as Messiah and Redeemer at the 2nd Advent and reign with Christ for 1,000 years.

Among Premillennialists some teach that the Rapture of the Church, so clearly described in 1 Thessalonians 4:13-18 and 1 Corinthians 15:51-56, will occur

Most Christians have held to a Pre-Tribulation Rapture but in recent years have been challenged.

The Revelation is Chronological

The confusion about when the Rapture occurs arises when people fail to understand some very obvious and clear interpretations of the Book of Revelation.

The Revelation given to John is a chronological outline of future events. The Church Age is described in chapters 2 and 3 in seven letters to seven churches after which John foresaw his own Rapture and wrote:

I heard was as it were of a trumpet talking with me; which said, Come up hither, and I will shew thee things which must be hereafter. And immediately I was in the spirit: and, behold, a throne was set in heaven, and one sat on the throne (Revelation 4:1-2).

Chapters 6 to chapter 18 of Revelation describes chronologically the events of the 7 years of Tribulation. The first 1,260 days from chapter 6 to 9, events at the mid-point in chapters 10 to 14 and the second 1,260 days in chapters 15 to 18. “After these things” John sees Christ returning to earth with His bride in chapter 19.

The Wedding is Before the 2nd Advent

Luke tells us that Christ will “return from the wedding” (Luke 12:36) and Jesus told the pre-Church, Jewish disciples to be ready, watching for his return.

A Post-Tribulation Rapture leaves no time for the wedding of Christ and His Church in heaven or of the Bema Seat where she prepares for the Supper!

No Mention of the Church from Revelation 6 to 18

After John foresaw his rapture in Revelation 4:1-2, he views events on earth from heaven and immediately we find Israel occupying the stage.

There will be 144,000 Jewish men who must preach the Gospel of the Kingdom to all nations and a great multitude of Gentiles will be converted. The focus is on Jerusalem where two prophets are martyred by the Beast after 1,260 days of testimony and their bodies are resurrected from the streets of Jerusalem after 31/2 days.

Worship in the Tribulation is in a Temple at Jerusalem where the Jews will be offering sacrifices and these will be terminated when the Beast (Antichrist) places his idol image in the Temple. Jesus said that at that time, the Jews in Jerusalem must “flee into the mountains” (Matthew 24:16).

In the second half of the 7 years Antichrist will seek to wipe out the Jews and finally bring “all nations” (Joel 3:2) to Jerusalem for the battle of Armageddon where Christ will come to the Mount of Olives and destroy the Beast and his armies.

The entire 7 years of Tribulation is about Israel’s repentance and deliverance in the “time of Jacob’s trouble” (Jeremiah 30:7). The Church is in heaven! There can’t be a Post-Tribulation Rapture or a Mid-Tribulation Rapture! Jews and Gentiles maintain Divine testimony in the 70th “week” of Israel’s prophetic history but the Church is “neither Jew nor Greek but…all one in Christ Jesus” (Galatians 3:28).

Before Pentecost when the Church began, Israel was God’s witness on earth. At Pentecost the Spirit spoke in Gentile languages and Israel was put aside, blinded and scattered to the ends of the earth. For 2,000 years the Church has maintained Divine testimony but this “mystery” Church age will end with the Rapture when God has a further 7 years to deal with Israel to bring them to repentance as described in Ezekiel 38/39. Then “Israel shall know that I am the Lord their God from that day and forward” (Ezekiel 39:22). It is completely contrary to the plan of God to place the Church in Israel’s 70th week.

The Promises of God are Denied by a Post-Tribulation Rapture

When Paul described the Rapture in 1 Thessalonians 4:13-18 he immediately went on to speak of the timing of the Rapture. He said:

But of the times and the seasons, brethren, ye have no need that I write unto you. For yourselves know perfectly that the day of the Lord so cometh as a thief in the night (1 Thessalonians 5:1-2).

The Day of the Lord is the Tribulation which will burst on the world when the world does not expect it and Paul states:

But ye, brethren, are not in darkness, that that day should overtake you as a thief … For God hath not appointed us to wrath, but to obtain salvation by our Lord Jesus Christ (1 Thessalonians 5:4-9).

In the context here the “wrath” is not eternal judgment in hell but the wrath of the “day of the Lord”. The Thessalonian Christians were not in need of salvation from sin. They already were forgiven saints and “followers of us (the apostles) and Christ” (1 Thessalonians 1:6). But they would be delivered from the time of wrath that would come on the world.

This “salvation” or deliverance promised to believers is from the “time” of the Day of the Lord and Jesus promised the Church at Philadelphia,

Because thou hast kept the word of my patience, I also will keep thee from  the hour of temptation, which shall come upon all the world, to try them that dwell upon the earth. Behold, I come quickly: hold that fast which thou hast, that no man take thy crown (Revelation 3:10-11)

The “word of my patience” is the truth of patiently waiting for Christ to come for His church which will be kept from the TIME of tribulation that will envelope the entire world!

When Jesus gave his Jewish disciples the signs of the end of the age (the tribulation) He likened it to the days of Noah and Lot. All things continued as they were

until the day that Noe entered into the ark, and the flood came, and destroyed them all (Luke 17:27).

But the same day that Lot went out of Sodom it rained fire and brimstone from heaven, and destroyed them all (Luke 17:29).

Noah and Lot were not rescued halfway through the judgment nor at the end of it. They were removed BEFORE the judgment began! It would be no sign to Israel if it occurred after the Tribulation was finished. Signs are before an event.

History of a Pretribulation Rapture

David Cloud recently read 50 histories and biographies on fundamental Bible testimony and discovered the truth that has brought blessing. He states:

As we draw closer to the Rapture and we see the day approaching we can expect Satan to seek to send confusion and discord in order to reduce the effectiveness of the Gospel and the testimony of the Rapture of the Church.

Medical science has prolonged life. Life expectancy is high and infant mortality almost non-existent in western countries so men do not fear death; their thoughts are only on living for pleasure.

Pre-Tribulation Rapture is the Message for the Last Days

The message for these last days is that all the pleasures of the world are soon to evaporate in a holocaust that will almost destroy all human life and the only escape is to turn to Christ, become a part of the bride of Christ, and then you will be raptured before the Day of the Lord bursts upon the world. It was this truth that brought me to Christ!

The alternative is to be left behind for terror, famine, earthquakes and death and, should you repent, be martyred for Christ!

The Post-Tribulation and Mid-Tribulation Rapture lies are part of Satan’s device to remove the warning to sinners and blunt the cutting edge of Gospel preaching. There has never been a time in history when it has been more important to warn the ungodly to “Flee from the wrath to come” but the Devil wants us to tell people there is no escape.

The Rapture is also the sign to Israel that the Day of the Lord has come. When “one shall be taken and the other left” it will cause 144,000 Jewish men to preach and multitudes will be saved. A Post-Tribulation Rapture silences the great sign to Jews to turn to Christ when the Church is taken. It is a devilish doctrine that should be rejected by God’s people.

If one adopts a Post-Tribulation Rapture position, one has no alternative but to be an Amillennialist. If the Rapture occurs at the end of the 7 years tribulation when Christ returns then there is nobody left on earth to enter the millennial kingdom. All living and dead saints will be resurrected and the unsaved will be sent to everlasting fire.

How then can any Post-Tribulationist claim to be Premillennial? They have shot themselves in the foot and destroyed any semblance of Premillennial doctrine. All the promises to Israel; all the details of life on earth in a future kingdom spread throughout the Old Testament prophets must then be spritualized. They cannot be taken literally. And if these scriptures cannot be literally interpreted, it is only a short step to spiritualizing the historical scriptures. This is why amillennialists can claim to be evangelical and at the same time deny that there ever was a garden of Eden or that there were 6 solar days of creation. In fact all the histories of the Old Testament can be treated as mythical!

Many Post-Tribulationalists have not thought through the implications of their error. Once you depart from Truth in any area of scripture it will lead to other errors. Post-Tribulationalism is therefore a fundamental error and must be rejected as such. It is not just a matter of repositioning the Rapture of the Church.