The Rapture is the Last Trump 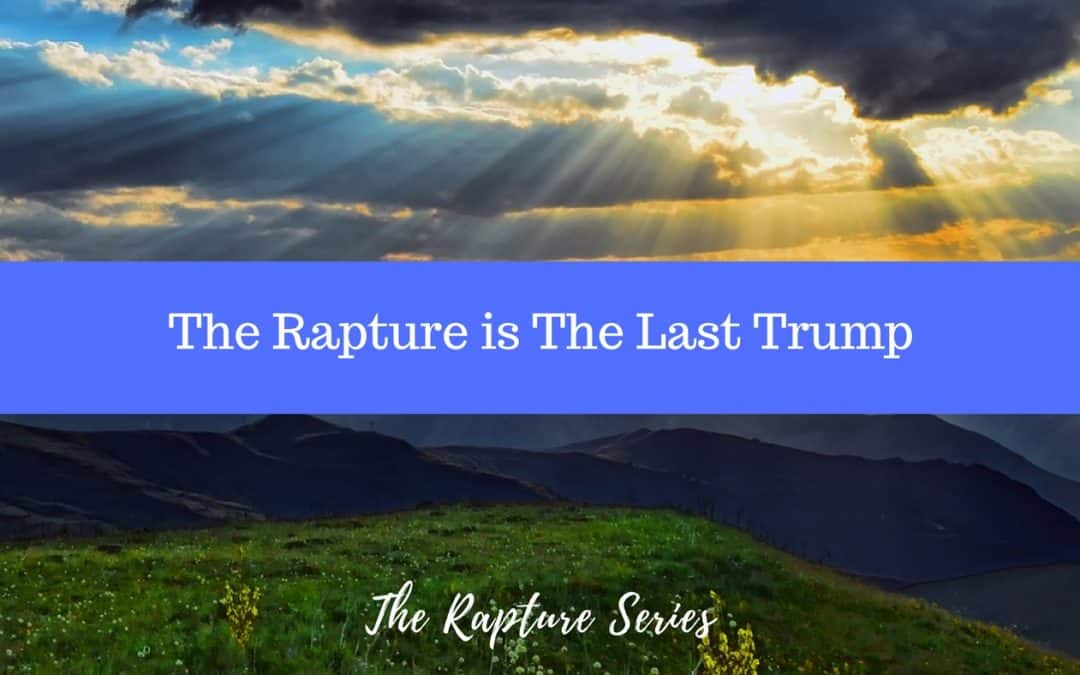 Behold, I shew you a mystery; We shall not all sleep, but we shall all be changed, In a moment, in the twinkling of an eye, at the last trump: for the trumpet shall sound, and the dead shall be raised incorruptible, and we shall be changed (1 Corinthians 15: 51-52).

These people contend that the “last trump” mentioned by Paul is the last of the seven trumpets that sound during the Tribulation.

In the Book of the Revelation we read that the Lord Jesus opened “a book written within and on the backside, sealed with seven seals” (Revelation 5:1). As each seal is opened a judgment is revealed and when the seventh seal is opened John saw

seven angels which stood before God; and to them were given seven trumpets (Revelation 8:2).

When the fifth trumpet sounded the bottomless pit was opened to release vast numbers of demons that appear like a locust plague and when the sixth trumpet sounded, four fallen angels that are “bound in the great river Euphrates” are released to gather 200 million men to wage war, probably in Asia for

When the seventh angel sounded his trumpet the “seven last plagues,” seven vials (bowls) are poured out upon earth during the second half of the seven years. If this seventh trumpet is the “trump of God” then the Rapture must be at the mid-point of the Tribulation. On this basis, the Church would have to pass through the first 1,260 days of the Tribulation. Therefore those who hold this view maintain a mid- Tribulation Rapture.

They shall see the Son of man coming in the clouds of heaven with power and great glory. And he shall send his angels with a great sound of a trumpet, and they shall gather together his elect (Israel) from the four winds, from one end of heaven to the other (Matthew 24:30-31).

If however, the “last trump” is the trumpet that sounds when Christ returns to gather Israel “from the four winds, from one end of heaven to the other,” Christians would have to pass through the entire Tribulation and this contradicts other scriptures that state that Christians will not go into the Tribulation. For example:

Because thou hast kept the word of my patience, I also will keep thee from THE HOUR of temptation, which shall come upon all the world, to try them that dwell upon the earth. Behold, I come quickly (Revelation 3:10-11).

This promise to the Church at Philadelphia is not that Christians will be kept from the judgments of the Tribulation but from “the hour” which will come “upon all the world”. They will be preserved from the time of Tribulation which can only mean they will be removed and will not be here.

Also in Paul’s first letter to the Thessalonians he states:

The day of the Lord so cometh as a thief in the night. For when they shall say, Peace and safety; then sudden destruction cometh upon them, as travail upon a woman with child; and they shall not escape…But ye, brethren, are not in darkness, that that day should overtake you as a thief. For God hath not appointed us to wrath, but to obtain salvation by our Lord Jesus Christ (1 Thessalonians 5:2-9).

A clear distinction is made between the saved and the unsaved. “They shall not escape” but “Ye brethren…are not appointed to wrath.”

The “wrath” in this verse cannot be punishment in hell because the context is “the day of the Lord,” which is the Tribulation.

So if the last trump is not the trumpet that blows at the end of the Tribulation, what is it? Paul died 30 years before John wrote the Book of the Revelation and knew nothing about the seven trumpet judgments which were revealed by Christ to John in AD96.

However, Paul lived and wrote in the era of the mighty Roman Empire whose armies constantly preserved peace in the provinces. Roman legions were extremely well disciplined and when they shifted, they followed strict procedures. Paul may have witnessed Roman legions shifting camp or at least would have been told about them.

The Jewish historian, Josephus, in his book entitled The Wars of the Jews, Book 3, Chapter 5, described how a Roman Legion shifted camp. Three trumpets were blown and the third trumpet was the last trumpet. He wrote:

Nor can their enemies easily surprise them with the suddenness of their incursions; for as soon as they have marched into an enemy’s land, they do not begin to fight till they have walled their camp about … When they have thus secured themselves, they live together by companies, with quietness and decency, as are all their other affairs managed with good order and security.

… they neither sup nor dine as they please themselves singly, but all together. Their times also for sleeping, and watching, and rising, are notified beforehand by the sound of trumpets, nor is anything done without such a signal … When they are to go out of their camp, the trumpet gives a sound, at which time nobody lies still, but at the first intimation they take down their tents, and all is made ready for their going out; then do the trumpets sound again, to order them to get ready for the march; then do they lay their baggage suddenly upon their mules and other beasts of burden, and stand, at the place for starting, ready to march; when also they set fire to their camp, and this they do because it will be easy for them to erect another camp, and that it may not ever be of use to their enemies.

Then do the trumpets give a sound the third time, that they are to go out in order to excite those that on any account are a little tardy, that so no one may be out of his rank when the army marches. Then does the crier stand at the general’s right hand, and asks them thrice, in their own tongue, whether they be now ready to go out to war or not. To which they reply as often, with a loud and cheerful voice, saying, “We are ready.” And this they do almost before the question is asked them; they do this as filled with a kind of martial fury, and at the time that they so cry out, they lift up their right hands also.

Paul used the symbolism of a Roman soldier and urged Christian to “endure hardness, as a good soldier of Jesus Christ” (2 Timothy 2:3). He spoke of taking the “whole armour of God” (Ephesians 6:13) and told Timothy, “No man that warreth entangleth himself with the affairs of this life; that he may please him who hath chosen him to be a soldier” (2 Timothy 2:4). He referred to Archippus as “our fellow soldier” (Philemon 1:2) and at the end of his ministry he said “I have fought a good fight, I have finished my course, I have kept the faith” (2 Timothy 4:7).

I think we can confidently say that Paul was well acquainted with the procedures in the Roman army and with this in mind, he would liken the rapture of the Church to a Roman legion shifting camp. The “last trump” was the final call to depart and the eagerness with which the Roman soldiers “with a loud and cheerful voice” answered their captain saying, “We are ready,” will be the response of Christians when the Lord descends with a shout saying, “Come up hither!”

THE TRUMP OF GOD

The Trump of God will one day sound
and the mystery church will not be found;
The Lord will call to all His Own
And saints on earth will know the tone.

The Trump of God will bring great fear
As millions here will disappear;
Some from their bed and from the mill
And those who plow the earth to till.

The Trump of God is likened to
The final call to soldiers true
Their camp on earth will now be burned
They’re heading home to rest they’ve earned.