Rejoice in the Coming Day of Christ 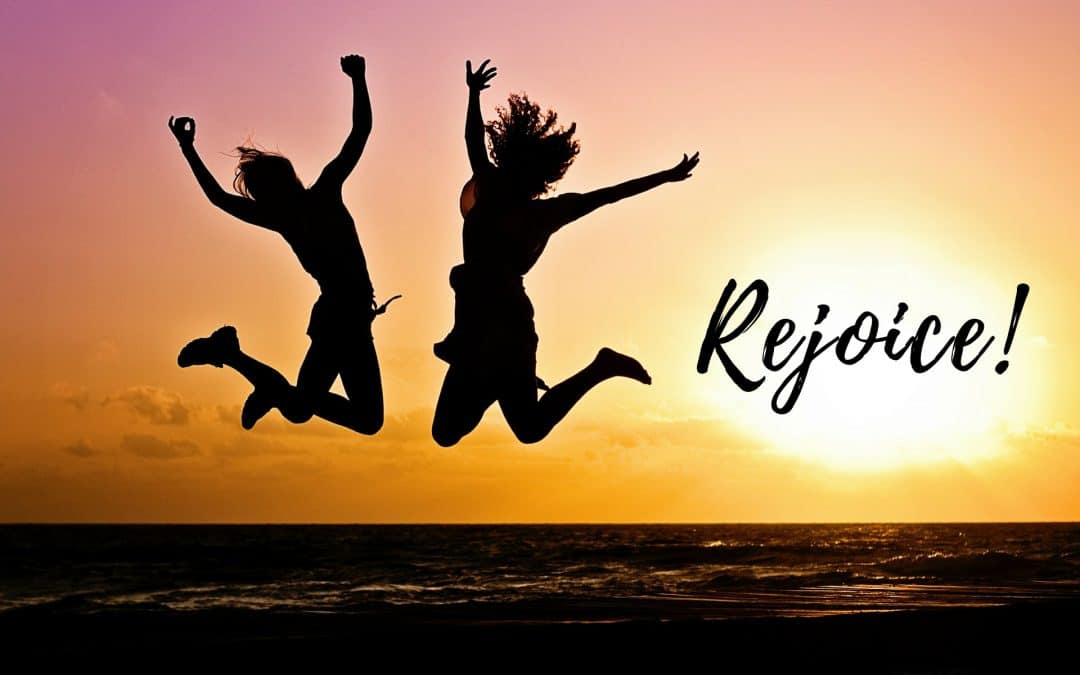 I thank my God upon every remembrance of you … being confident of this very thing, that he which hath begun a good work in you will perform it until the day of Jesus Christ (Philippians 1:1-6).

If you think you have problems just pause to reflect on Paul. He was rescued by Roman soldiers from a howling mob at Jerusalem and sent to Caesarea under armed escort where he spend 2 years “bound” in a prison cell before being shipped under guard to Rome where he spent another 2 years in his own hired house chained to a Roman soldier.

On top of all this, while Paul was confined as a prisoner at Rome, he was deeply hurt by some who attacked him and divided the Christians; probably Judaizers like the ones at Galatia. In all probability they falsely accused him of renouncing the law of Moses and said his prison sentence was his just deserts. Whatever it was, they were insincere and intent on adding “affliction to his bonds” (Philippians 1:16).

The Devil knows how to rally his forces against God’s servants. To have those who profess Christ reject you after years of imprisonment for the Gospel would be the last straw that breaks the camel’s back. Nothing hurts a Christian more than to be attacked by those who should love you. We understand why the ungodly persecute us but fellow believers make deeper wounds.

One would think that fellow Christians would be moved with compassion when they saw Paul suffer. They owed him a debt.

Prisoners held by the Romans were given half the quantity of food allocated to slaves and they depended on family and friends to supplement their meagre rations. Rations were withheld by guards when they were nasty.

The Philippian Christians were not like some of those at Rome; they had a great love for Paul and supplied provisions for him whenever they could, though they didn’t always have opportunity to do so (Philippians 4:10).

Paul’s epistle to the Philippians, written from Rome, was to express his great appreciation for the kindness they had shown.

Years had passed since Paul had seen the believers at Philippi and much of that time he had been out of circulation. His ministry was serverely restricted while under armed guard but the Philippians hadn’t forgotten him. In fact, they were the only Church that sent relief to the ageing prisoner of Jesus Christ (Philippians 4:15). He said,

Ye have well done, that ye did communicate with my affliction… when I departed from Macedonia, no church communicated with me as concerning giving and receiving, but ye only (Philippians 4:14-15).

After years of confinement and isolation at the Emperor’s pleasure, separated from the Churches he planted, one would expect the Apostle of Jesus Christ to be discouraged but his thank-you letter to the Philippians shows quite the opposite.

Paul didn’t look to any man for the supply of his needs. He knew how to be content whatever his lot down here. He said:

I know both how to be abased, and I know how to abound: every where and in all things I am instructed both to be full and to be hungry, both to abound and to suffer need. I can do all things through Christ which strengtheneth me (Philippians 4:12).

If gifts had not arrived he was hungry but he considered it an honour to be a hungry prisoner chained to a Roman soldier in “the defence of the Gospel” (Philippians 1:17).

Paul valued the Gospel so much that he considered it worth suffering for and what’s more, if he hadn’t been a prisoner of Rome, some of Caesar’s household would never have heard the Gospel. He could rejoice that his “bonds in Christ are manifest in all the palace, and in all other places” (Philippians 1:13); that “the things which happened unto me have fallen out rather unto the furtherance of the gospel” (Philippians 1:12).

If he hadn’t been a prisoner he would never have won some of Caesar’s household to the Lord nor been able to send salutations to the Philippians from these new saints! (Philippians 4:22).

Rejoice in the Lord alway: and again I say, Rejoice (Philippians 4:4).

Every crisis was to Paul another opportunity. Can you imagine yourself being a Roman soldier chained to Paul? Paul was not a normal prisoner. He didn’t murmur or complain. In fact he exhorted others to

Do all things without murmuring (muttering) and disputings (Philippians 2:14).

And do you think any guard would leave his shift of duty without fully hearing of a Saviour who loved him and died on a Roman cross to atone for his sins? Every guard was a captive audience.

When Paul stood before Caesar it was not to defend himself but to preach the Gospel. What a glorious opportunity to preach to the Caesar of Rome! How many people would ever even see the Emperor, let alone defend the Gospel of Christ before him?

From the very beginning, the first night after Paul was rescued from the mob in Jerusalem, the Lord had stood by him and told him

Again, on that dark night aboard a ship just off the island of Melita as wild winds lashed the helpless vessel, the angel of God stood by him and said,

Paul knew that God was taking him to Rome to witness to Caesar and his household! Never in his wildest dreams had he thought that he, a little despised Jew whose “bodily presence was contemptable”, would be ushered into the presence of the most powerful man on the face of the earth to share the glorious Gospel of Jesus Christ.

What’s more, at his first hearing he miraculously escaped the executioner’s sword so he would have second opportunity!

God Has a Plan for You!

In fact, God has a plan for all of us and though Satan might try to shipwreck us on the way, he can never thwart God’s purpose while we walk with the Lord.

When opposition comes there is no place for despondancy. Whatever the circumstances we are “more than conquerors through Him that loved us” (Romans 8:37). We are to count it “all joy” (James 1:2) that we are worthy to suffer for Christ. It is a privilege and not an imposition.

Eleven times in his short four- chapter-epistle to the Philippians Paul uses the word rejoice and six times he speaks of joy or joyfulness. When he tells them to rejoice he repeats it – “again I say rejoice”, just in case they didn’t get the message the first time! If we are in the will of God it matters not where we are or in what circumstances we find ourselves, we can rejoice.

When Nehemiah and Ezra returned from Babylon, Jerusalem was being rebuilt amidst strong opposition and threats from the Samaritans but they exhorted the people saying,

Neither be ye sorry; for the joy of the LORD is your strength (Nehemiah 8:10).

Many of us may find it hard to rejoice when the future is bleak, when trouble hangs over the family, when our bodies are weak and ageing. But while we have our eyes on the Lord we will never sink no matter how wild the storm. Peter walked on water while he kept his eyes on the Lord but when he “saw the wind boistrous, he was afraid”and began to sink (Matthew 14:30).

There is no storm so wild, no wind so boistrous, no wave so high that it can sweep us away while our eyes are on Christ. With “Christ in you the hope of glory” that blessed hope shines brighter, the darker the world gets!

There is no indication that Paul was morose and depressed about his prospects. The worst Caesar could do to him was order his execution. Death held no dread for Paul even if the sword fell upon his neck he knew that:

The very worst men could do to him would promote him to glory. He had no fears that the people he had won to Christ would fall away after his departure. He was confident that the work God had done in the saints at Philippi would continue “until the day of Jesus Christ” (Philippians 1:6).

Paul’s labour would not be in vain and so he urged the believers to be genuine, “sincere and without offence, till the day of Christ” (Philippians 1:10); to be “blameless…in the midst of a crooked and perverse nation” in which they “shine as lights…holding forth the word of life.”

The presence of these Philippian saints at the Rapture would cause him to “rejoice in the day of Christ” (Philippians 2:15-16).

The day of Christ is a day of rewards for service and nothing would stop Paul from striving intensely, like an Olympic athlete, for the prize of the “upward call” when the trump of God shall sound and he would be raptured.

The day of Christ is the day when Christ as the heavenly Bridegroom, will come into the heavens to catch away His bride.

The day of Christ is the day that perfection will be experienced by every believer and we finally “apprehend that for which we were apprehended of Christ Jesus” – then “our vile body shall be fashioned like unto His glorious body” (Philippians 3:21).

Paul was aware that he could not attain to the perfection of resurrection down here, but it was still his goal. No lesser standard than perfection would suffice and he looked for the day when “our vile body” is “fashioned like unto His glorious body” (Philippians 3:20-21).

This was his secret for overcoming the afflictions in this life. It was to not, “mind earthly things” but to have “our conversation (manner of life) in heaven” and to be constantly looking for “the day of Christ.”

I’m sure Paul did not know the following chorus, but if he did, I have no doubt the Roman guards would have heard him sing it many times.