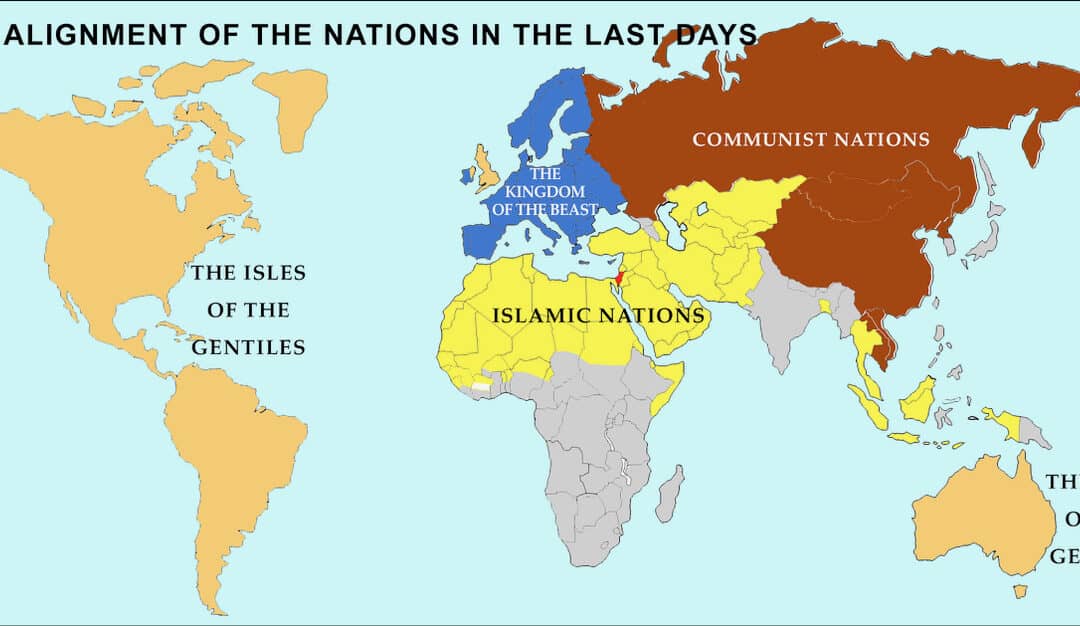 And I will send a fire on Magog, and among them that dwell carelessly in the isles: and they shall know that I am the LORD (Ezekiel 39:6).

The  nations  of  the  world  are assembling   for   the   drama of the last days – the “end of the age”, otherwise known as the Great Tribulation. This 7-year period of awful trouble will occur immediately after the Rapture of the Christians and the signing of a covenant between Israel and the Antichrist at the head of the Revived Roman Empire (EU).

The map below indicates the alignment of the nations occurring in our day. Those who know the Scriptures will recognize the similarity with Biblical prophecy.

Two movements are afoot under the direction of Islamic Terrorists and Communism. Both of these aspire to conquer the world and both are joining forces to overthrow the Western nations of Britain, America and Israel.

In between these power blocks we find the European Union, the revived Roman Empire, biding her time for she will not play her part until the second half of the 7-year Tribulation.

The first half of the Tribulation will erupt into an inferno as the seven seals and seven trumpet judgments are poured out upon earth. Communism and Islam will both be destroyed when Israel turns to Jesus Christ.

By the time the mid-point of the Tribulation has been reached much of the world will be in ruins; nations will have collapsed, pestilence will be raging, the environment will be destroyed and millions will be starving – willing to accept anyone who offers help.

These judgments have already been determined by God and are described in the Book of Revelation chapters 6 to 9.

The 2nd Seal Judgment will “take peace from the earth” and they will “kill one another”. That sounds very much like terrorism. Wherever Islam is identified there is terrorism. In the Middle East, Africa, Europe and where possible in the UK, US and Australia, terrorism is either occurring or is threatened. The Islamists have established their terror cells throughout the Western nations and have every intention of venting their fury on the Free World.

Assisting these Islamist nations are communist nations who can supply the terrorists whether they be Taliban, Muslim Brotherhood, Isis, Hezbollah, Sunni or Shiite.

With the demise of Western forces in Afghanistan China has become their associate.

The religion of Islam preaches that there will be a last-days global slaughter in order to cause all the nations to adopt the Muslim religion and that the Mahdi will appear at the time of the end.

However in a modern world warfare has become highly technical and Islamist nations have lagged behind the Western nations and communist nations.

Islamists lack the industrial might to confront the Western powers and therefore they must adopt a different strategy – infiltration and terrorism.

The Islamist nations lack the industrial might to fight a conventional war. Modern wars are fought in the skies and on the seas so Islamists have chosen to infiltrate and sabotage.

Islam by its very nature keeps its people ignorant and poor. Individual effort and initiative is characteristic of the Western nations but Islamic nations are happy to blindly follow fanatical religious leadership.

The return of the Jews to their land and the establishment as a nation in 1948 in fulfilment of Bible Prophecy has caused the Islamists to set out on a path to totally annihiliate every Jew just as was attempted by the Nazis.

But Israel is a brilliant nation. She has only 7 million people in the Middle East compared with around 420 million Arabs.

Israel has enormous technical and industrial might. Israel’s military is among the most modern in the world and even with massive armies far outnumbering the Jews, Israel has been victorious in every war.

Iran has embarked on a course to gain a technical advantage over Israel by developing nuclear weapons but Israel has the power to stop the final development of such weapons. At the appropriate time Israel will act and the entire nuclear program in Iran will be destroyed.

Under President Trump Iran’s nuclear program was slowed but Biden now wants to renegotiate the nuclear agreement that will allow Iran to obtain nuclear weapons.

Without nuclear weapons, Islam’s only option, if they are to destroy Israel, is to join forces with communist nations and invade the land of Israel. That alliance is forming as we write: Russia is already involved in Syria and is supplying Islamic nations with military equipment; Russia threatens to shoot down Israeli planes attacking Iranian forces in Syria. Egypt manufactures Russian tanks and missile technology is supplied to Iran by North Korea.

The greatest danger to an Islamist invasion of Israel is support from the USA. In previous Arab/ Israeli wars the supply of military equipment from the US enabled the Jews to turn the tables on superior numbers attacking from Syria and Egypt.

The strategy therefore must be to weaken the Western nations so that that they will not be able to assist Israel when she is invaded. The release of Covid-19 may be part of that plan.

But this process began with getting a Muslim President elected in America. Obama began the process of reducing US preparedness by cutting miltary budgets to such an extent that half the US military planes could not fly for lack of spare parts! Obama supplied Iran with billions of US dollars and signed the agreement that allowed Iran to have nuclear weapons after 10 years!

When Trump restored the US military the left-wing (Communist) forces rigged the Presidential election to get rid of him and now under Biden we have seen the Taliban victorious and over $80 billion of US military equipment paid for by Trump, in the hands of Islamists and Communists. China is moving into Afghanistan!

The Invasion of Israel

Ezekiel devoted two whole chapters to a description of the invasion of Israel by Russia and her Islamic associates (chs38/39) and Joel devoted one third of his prophecy to the same subject! John in the Revelation devotes chapter 6 to global terrorism and the judgment of Russia and Islam.

The Russian/ Islamic catastrophe will be accompanied by a global earthquake when Israel repents and turns to Jesus Christ.

But how will Western support for Israel be neutralized to allow Israel to be overrun? We know that there will be a challenge from “Sheba and Dedan (Arabia) and the merchants of Tarshish with all the young lions thereof” when Russian and Islamic armies roll into Israel (Ezekiel 38:13) and we know from Scripture that Israel is victorious, not because of assistance from the US, but by Divine intervention. 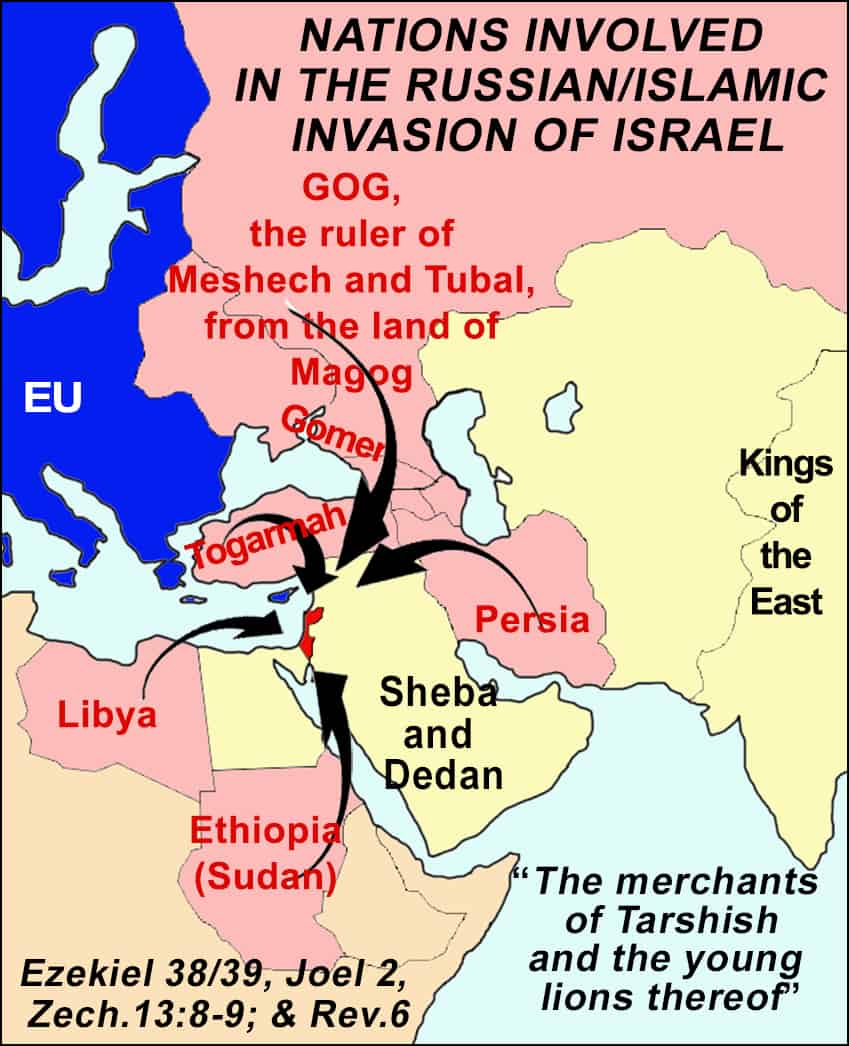 The invading armies will not be able to anticipate the extent or nature of the forces God will unleash against them.

Remember how Napoleon was defeated in Russia, not by the Russians but by the snow and ice that froze his army. And Hitler was defeated in Russia for the same reason. The weather that God controls brought the German Panzer Units to a halt and made them sitting ducks for Russian artillery. Supply lines ceased to operate as God sent rain and snow on the roads and German troops starved, froze and surrendered.

Remember Dunkirk? Hitler had 350,000 allied troops trapped in France and God sent clouds so that the German Luftwaffe could not bomb the armada of ships that crossed the English Channel to rescue the allied forces. Christians were praying.

Even without US assistance Israel will be victorious once she turns to the Lord and when Russia and Islam invade. God says:

I will send a fire on Magog, and among them that dwell carelessly in the isle.

We know who Magog is; it is Russia, but who are those that “dwell carelessly (confidently) in the Isles?” We know that God gave the “Isles of the Gentiles (Genesis 10:5)” to the sons of Javan. Javan was an ancient name for Greece (Europe) and Tarshish was one of his sons. Tarshish was Great Britain and it is “the merchants of Tarshish and the young lions thereof” who challenge the Russian/Islamic invasion!

There is no more “confident” nation in the world than the US and they have had reason to be so. Without the US armies WWI and WWII would never have been won by the Allies. Their navies rule the oceans but God says they will be burned when Russia is burned. Does this suggest a shoot-out between Russia and the US and both are immobilized?

There is another possible explanation for Russia being burned by fire. Professor Lance Endersbee former Pro-Vice Chancellor of Melbourne’s Monash University has written a book entitled, A Voyage of Discovery in which he devotes one chapter to the Black Sea that laps the southern shores of Russia.

From time to time the methane gas rises to the surface and with the reduction in water pressure, expands to return to a gas and is released into the atmosphere. From time to time during storms these gases ignite and burn if struck by lightening.

The danger is that the strong concentration of methane gas in the waters of the Black Sea might be disturbed by earthquake action which is common in the region. It could rise to the surface, be released as gas, and catch fire. So concerned about this is the EU that it is funding a team of international scientists to monitor the situation.

Earthquakes are common in the region and the possibility of the deep water being disturbed causing the high concentration of methane gas to come to the surface is very real. We know that at the time of the Russian invasion there will be a global earthquake. Ezekiel wrote:

Surely in that day there shall be a great shaking in the land of Israel; So that the fishes of the sea, … and all the men that are upon the face of the earth, shall shake at my presence, and the mountains shall be thrown down, and the steep places shall fall, and every wall shall fall to the ground (Ezekiel 38:19-20).

With such a shaking the methane gas would be released and the Black Sea become an inferno.

According to Ezekiel this global earthquake will impact on the oceans for it will affect “the fishes of the sea”.

Once the saturated solution comes to the surface it will only need a southerly wind to blow the gas over Russia and the land of Magog (Russia) could not fail to be burned.

We are no doubt living in the last days and the Rapture must be drawing near for the Russian invasion cannot occur until after the Rapture. The conversion of Israel will spell Russia and Islam’s doom before Jesus returns.

It is time to seek the Lord. The Lord Jesus, God the Son, left heaven and took upon Himself human flesh so that He might die and shed His blood and thus make atonement for the sin of humanity.

It was the love of God for a lost and sinful humanity that motivated God to send His beloved Son to despise the shame and endure the cross so that we can be saved.

Whosoever shall call upon the name of the Lord shall be saved.