The Last Trump – A Good Soldier of Jesus Christ 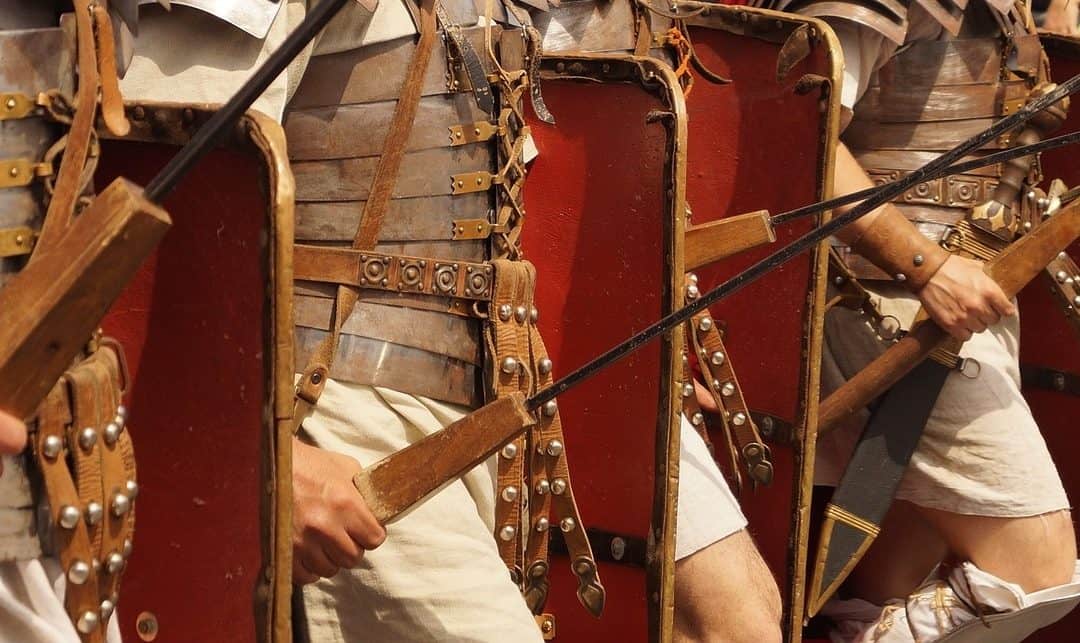 The Last Trump A Good Soldier Of Jesus Christ is also available as a PDF Download
95.92 KB 1072 downloads

Lessons from the Roman Army

The following article indicates how the Roman legions maintained readiness and moved camp. There are many lessons for the Christian to learn from the Roman army when we see ourselves as a “good soldier of Jesus Christ”. The following is taken from The Wars of the Jews Book 3, Ch.5 by Josephus. He wrote:

They do not begin to use their weapons first in time of war, nor do they then put their hands first into motion, while they avoided so to do in times of peace; but, as if their weapons did always cling to them, they have never any truce from warlike exercises; nor do they wait till times of war admonish them to use them;

(73) for their military exercises differ not at all from the real use of their arms, but every soldier is every day exercised, and that with great diligence, as if it were in time of war which is the reason why they bear the fatigue of battles so easily;

(74) for neither can any disorder remove them from their usual regularity, nor can fear affright them out of it, nor can labor tire them; which firmness of conduct makes them always to overcome those that have not the same firmness;

(75) nor would he be mistaken that should call those their exercises unbloody battles, and their battles bloody exercises.

(76) Nor can their enemies easily surprise them with the suddenness of their incursions; for as soon as they have marched into an enemy’s land, they do not begin to fight till they have walled their camp about;

(84) The camp, and all that is in it, is encompassed with a wall round about, and that sooner than one would imagine, … When they have thus secured themselves, they live together by companies, with quietness and decency, as are all their other affairs managed with good order and security. … they neither sup nor dine as they please themselves singly, but all together. Their times also for sleeping, and watching, and rising, are notified beforehand by the sound of trumpets, nor is anything done without such a signal;

…When they are to go out of their camp, the trumpet gives a sound, at which time nobody lies still, but at the first intimation they take down their tents, and all is made ready for their going out;

(90) then do the trumpets sound again, to order them to get ready for the march; then do they lay their baggage suddenly upon their mules and other beasts of burden, and stand, at the place for starting, ready to march; when also they set fire to their camp, and this they do because it will be easy for them to erect another camp, and that it may not ever be of use to their enemies.

(91) Then do the trumpets give a sound the third time that they are to go out in order to excite those that on any account are a little tardy, that so no one may be out of his rank when the army

(92) Then does the crier stand at the general’s right hand, and asks them thrice, in their own tongue, whether they be now ready to go out to war or not. To which they reply as often, with a loud and cheerful voice, saying, “We are ” And this they do almost before the question is asked them; they do this as filled with a kind of martial fury, and at the time that they so cry out, they lift up their right hands also.”

We are reminded of the Lord’s words:

Watch therefore, for ye know neither the day nor the hour wherein the Son of man cometh (Matthew 25:13).

Like the Roman soldier we should live a disciplined life, always ready to give a reason for the hope that is within us.

Just as the Roman soldier constantly practiced the art of warfare we need to be prepared, and when the last trumpet sounds we will be able to shout, “We are ready!”

When Paul spoke of the “last trump” sounding at the Rapture he was not talking about the last of the 7 trumpet judgments in the Tribulation but he used a military term to indicate the final call for the Church to shift camp from earth to heaven.

On earth we are engaged in spiritual warfare. Satan is our enemy and he incites his agents to attack the Lord’s servants. He accuses us before the throne of God and seeks to trip us up. In this warfare:

we wrestle not against flesh and blood, but against principalities, against powers, against the rulers of the darkness of this world, against spiritual wickedness in high places (Ephesians 6:12).

May we be able to say with Paul:

I have fought a good fight, I have finished my course, I have kept the faith: Henceforth there is laid up for me a crown of righteousness, which the Lord, the righteous judge, shall give me at that day: and not to me only, but unto all them also that love his appearing (2 Timothy 4:7-8).