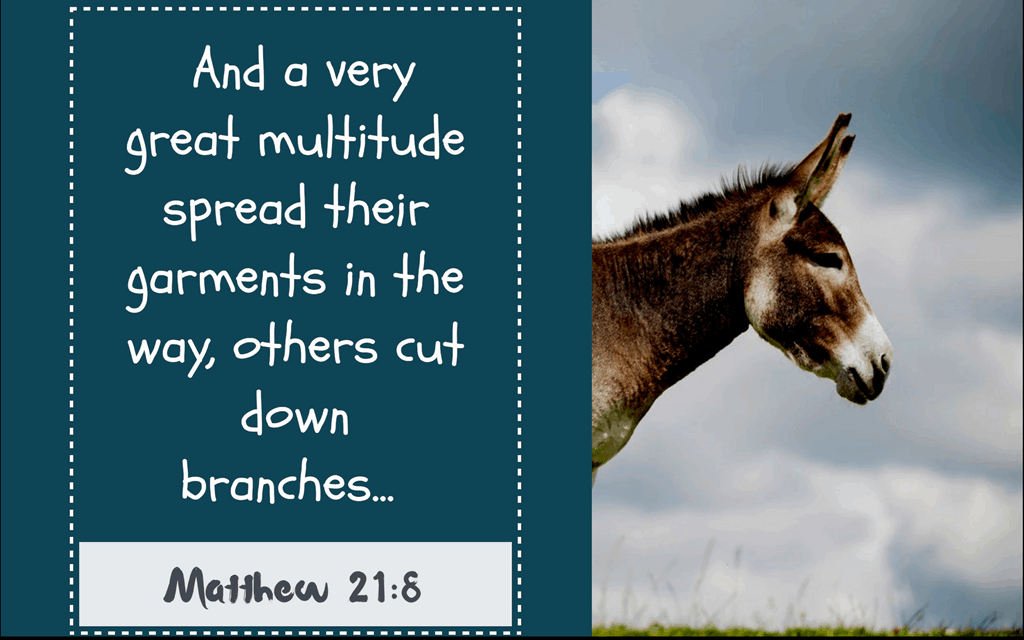 Rejoice greatly, O daughter of Zion; shout, O daughter of Jerusalem: behold, thy King cometh unto thee: he is just, and having salvation; lowly, and riding upon an ass, and upon a colt the foal of an ass. (Zechariah 9:9)

The entry of Jesus into Jerusalem upon a foal of a donkey had been foretold by the Prophet Zechariah in the Old Testament some 500 years before.

Numbers of Jews in Jesus’s day looked forward to a Golden Age where Israel would triumph over their enemies. They believed that God would help them do this by sending them a Messiah/King that would lead them to victory.

As Jesus rode into Jerusalem He was given a royal welcome as they laid their garments and Palm branches down to welcome their King.

Finally the long awaited descendant of King David had arrived. There were those that hoped that the military conquest was going to begin.

Perhaps the crowd missed something that day. Jesus did not enter Jerusalem on a horse. If a King went to war he would ride on a horse. A horse was a sign of power, but Jesus was riding on the foal of a donkey.

Jesus was not leading an army with weapons and He wasn’t dressed like a conquering King going into battle, rather Jesus came to that city where soon He would be God’s suffering servant for the sins of all humanity.

Jesus was not going to put down the Romans but Jesus was going to allow them to put Him down on the ground where He would be nailed to a cross.

At the Passover when 1000’s of Lambs were sacrificed, Jesus was to become God’s Lamb (1 Corinthians 5:7) to be sacrificed for the sins of the entire world.

Jesus came the first time in HUMILITY. The next time He returns to this earth He will come in MAJESTY.

And he was clothed with a vesture dipped in blood: and his name is called The Word of God. And the armies which were in heaven followed him upon white horses, clothed in fine linen, white and clean. And out of his mouth goeth a sharp sword, that with it he should smite the nations: and he shall rule them with a rod of iron: and he treadeth the winepress of the fierceness and wrath of Almighty God.