The Sin of Sodom 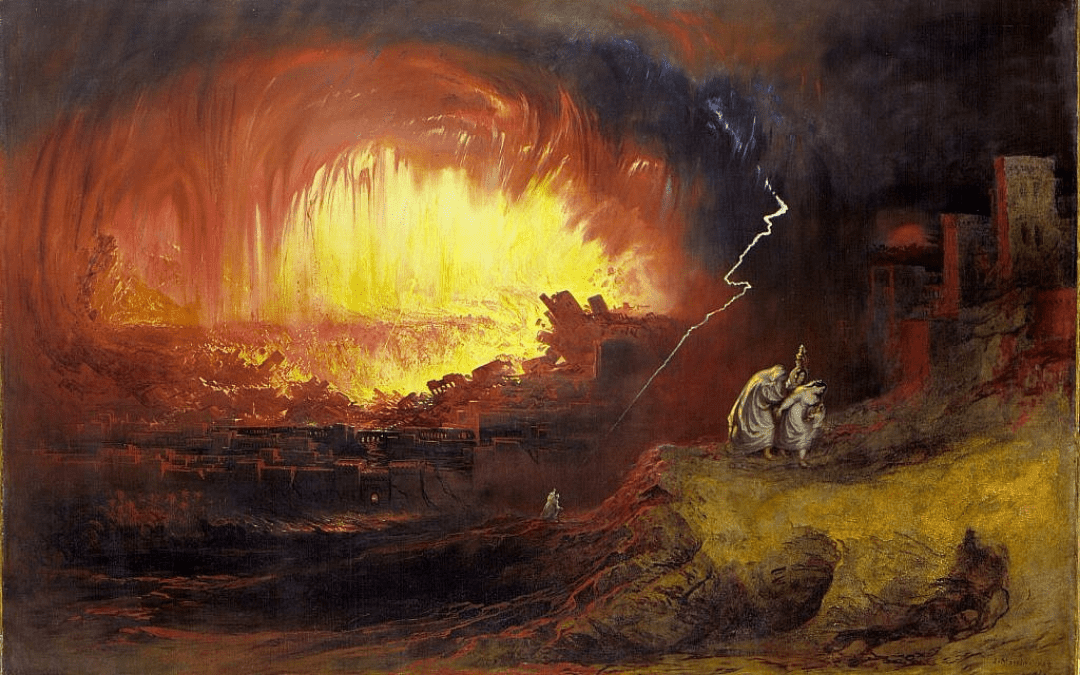 Behold, this was the iniquity of thy sister Sodom, pride, fulness of bread, and abundance of idleness was in her and in her daughters, neither did she strengthen the hand of the poor and needy. And they were haughty, and committed abomination before me: therefore I took them away as I saw good (Ezekiel 16:49-50).

Ezekiel denounced the sins of the land of Judah and used a proverb to describe them. He said that people were saying,

We would say, “like mother – like daughter”. He likened Judah to her elder sister Samaria, and to her younger sister Sodom. He said Judah had exceeded the sins of Samaria and Sodom.

The sins of Sodom are described and these included “fulness of bread” i.e. they lived in luxury and “idleness” and they did not care for the “poor and needy” but that was not all.

Other Scriptures describe the sins of Sodom as moral depravity and homosexuality. When two angels appeared as men and visited Sodom for the purpose of seeing whether the sin of Sodom warranted the judgment of God, the men of Sodom wanted to rape the angels in the streets of Sodom.

When Lot objected they even tried to break down the door of Lot’s house to get at the angels. The angels smote these evil men with blindness so that they could not find the door.

It has been reasoned by some that Ezekiel paints a different picture and that the real sin of Sodom was not caring for the poor and needy but is this right?

The sin of despising the poor and needy is a great sin in God’s eyes. God cares about the fatherless, the widows and the poor stranger. When men show no sympathy for such people God is greatly displeased. He hears the cry of the poor and needy including the cry of helpless babies dragged from their mothers womb and disposed of in the abortion bin.

But failure to “strengthen the hand of the poor and needy” was not the only sin of Sodom; they were “haughty and committed abomination” therefore God “took them away” in fire and brimstone.

There is no doubt that the Bible indicates the destruction of Sodom was because God was angry with the behaviour of those people. Moses warned Israel that they would be judged if they turned away from serving the Lord and he said the whole land would become

like the overthrow of Sodom, and Gomorrah, Admah, and Zeboim, which the LORD overthrew in his anger, and in his wrath” (Deuteronomy 29:23).

What was the “abomination” that was so detestable to God that caused Him to be angry and to send fire from heaven to consume Sodom and all the cities of the plain of Jordan? We can understand the “haughtiness” of the men of Sodom because of their behaviour when the two angels appeared as strangers in the streets of Sodom. It seems that “haughtiness” is a characteristic of those who practice the sin of homosexuality. The prophet Isaiah spoke of this sin and said,

The shew of their countenance doth witness against them; and they declare their sin as Sodom, they hide it not. Woe unto their soul! for they have rewarded evil unto themselves” (Isaiah 3:9).

If a man also lie with mankind, as he lieth with a woman, both of them have committed an abomination: they shall surely be put to death; their blood shall be upon them” (Leviticus 20:13).

The law that God gave to Moses prescribed the death sentence for acts of sodomy. The same law is repeated in Leviticus chapter 18 and verse 22:

Thou shalt not lie with mankind, as with womankind: it is abomination” (Leviticus 18:22).

After listing many moral, sexual sins, Israel was warned:

Transgender behaviour is considered an abomination to the Lord:

The woman shall not wear that which pertaineth unto a man, neither shall a man put on a woman’s garment: for all that do so are abomination unto the LORD thy God” (Deuteronomy 22:5).

Visitors to the land of Israel are intrigued by the landscape around the Dead Sea. This deep valley is the lowest place on earth at about 1,200 feet below sea level and the depth of the Dead Sea is about 1,000 feet deep. It is the deepest lake on the face of the earth.

The country around the Dead Sea is barren and desert and the waters of the Dead Sea are ten times more salty than the oceans in spite of the fact that only fresh water flows down the Jordan River into it.

The Dead Sea is the location of the cities of Sodom and Gomorrah. When Abraham entered the land of Canaan about 1977BC the Jordan Valley was a lush fruitful plain and the fresh waters from the Sea of Galilee flowed through it all the way to the ocean at the Gulf of Aquaba. Life was easy in such fertile country where flocks were fed and agriculture flourished. The valley of Siddim nearby was full of “slime pits”, bitumen pits, that could be used as mortar in the construction industry.

Ezekiel described the people who enjoyed such idyllic conditions as having “fulness of bread” and “abundance of idleness”. When Abram’s young nephew was given a choice as to where he wanted to take his flocks he instantly chose the plains of Jordan and bought a house in the city of Sodom.

But vistors to the land of Israel today find a totally different scene. The great Jordan Valley Rift has been hit by a catastrophe that caused the land from north of Galilee all the way down the Gulf of Aquaba and across into Africa, to sink.

No longer does the Jordan River run into the ocean but evaporates from the salty, stagnant waters of the Dead Sea where nothing can live and if anyone swallows the water they will die.

We know exactly when this great catastrophe took place because there were eye witnesses who recorded the occasion about 4,000 years ago. Early one morning Abram recorded the events of that day as he watched from the heights near Hebron:

And he looked toward Sodom and Gomorrah, and toward all the land of the plain, and beheld, and, lo, the smoke of the country went up as the smoke of a furnace” (Genesis 19:28).

Only Lot with his two daughters escaped from Sodom that day and Abram recorded:

The sun was risen upon the earth when Lot entered into Zoar. Then the LORD rained upon Sodom and upon Gomorrah brimstone and fire from the LORD out of heaven; And he overthrew those cities, and all the plain, and all the inhabitants of the cities, and that which grew upon the ground” (Genesis 19:23-25).

It was God’s answer to the immorality of Sodom and the cities of the plain.

When we come to the New Testament we find the same Divine moral standards are clearly stated. The Apostle Paul described the sinful behaviour of the idolatrous heathen and warned that God had given them up:

Wherefore God also gave them up to uncleanness through the lusts of their own hearts, to dishonor their own bodies between themselves: Who changed the truth of God into a lie, and worshipped and served the creature more than the Creator, who is blessed for ever. Amen. For this cause God gave them up unto vile affections: for even their women did change the natural use into that which is against nature: And likewise also the men, leaving the natural use of the woman, burned in their lust one toward another; men with men working that which is unseemly, and receiving in themselves that  recompence of their error which was meet” (Romans 1:24-27).

When the Gospel of Christ was first preached among the Gentile nations it had to confront a totally new environment. Within Israel the Law of God was the law of the land and while the nation had turned to tradition  they still had the knowledge of God’s law given to Moses. Sexual immorality was evil even if the law was not obeyed. But in the heathen Roman Empire where people worshipped idols and sacrificed to Emperors, immorality was acceptable. Heathen temples had temple prostitutes and in Babylonian times, Herodotus states that every woman was required to present herself once at the temple to engage in sexual discourse with any man who passed by and cast a coin into her lap. It was a part of their religion. The evil sons of Eli engaged in these heathen sexual rites associated with the godess Ashtaroth at the temple in Samuel’s day.

But the law of God was different and the Gospel of Christ deliversmen and women from immorality and lustful behaviour. In the New Testament sexual relations are only permissible within the marriage relationship. God says:

Marriage is honorable in all, and the bed undefiled: but whoremongers and adulterers God will judge” (Hebrews 13:4).

Paul wrote to the Corinthians:

It is good for a man not to touch a woman. Nevertheless, to avoid fornication, let every man have his own wife, and let every woman have her own husband. Let the husband render unto the wife due benevolence: and likewise also the wife unto the husband. The wife hath not power of her own body, but the husband: and likewise also the husband hath not power of his own body, but the wife. Defraud ye not one the other, except it be with consent for a time” (1Corinthians 7:1-5).

The moral standards of the Old Testament still apply in the New Testament and Paul warned:

Now the works of the flesh are manifest, which are these; Adultery, fornication, uncleanness, lasciviousness … and such like: of the which I tell you before, as I have also told you in time past, that they which do such things shall not inherit the kingdom of God” (Galatians 5:19).

Where there is failure the blood of Christ can cleanse the guilty and give victory over sinful desires. In fact if any man be in Christ he is a new creature. Old things pass  away and all things become new when we come in true repentance and faith in Christ.

The Gospel of Christ … is the power of God unto salvation to every one that believeth” (Romans 1:16).