The Temple at Shiloh 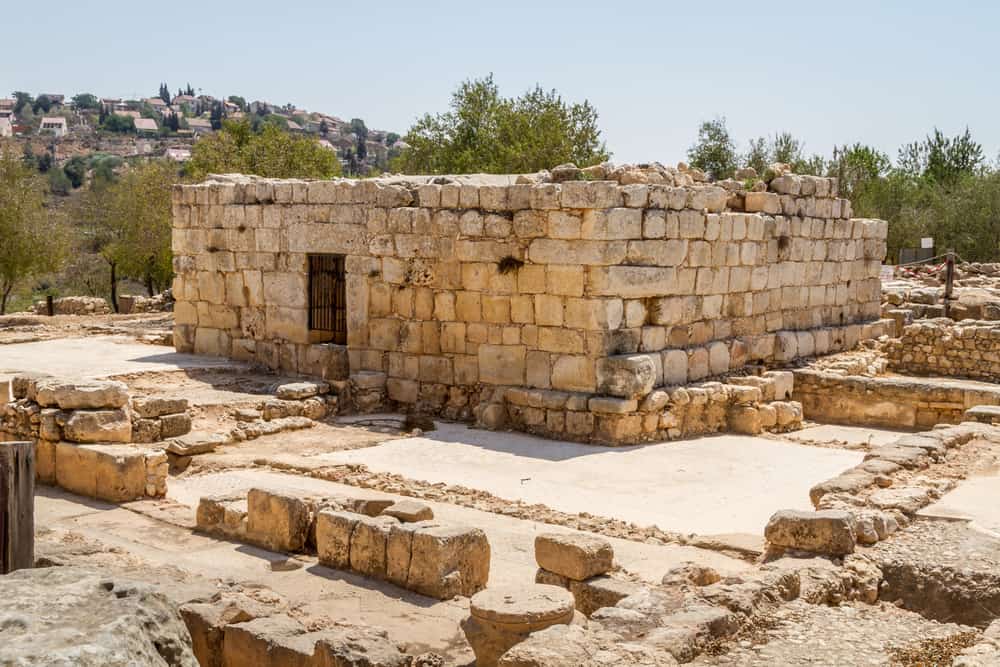 When the children of Israel conquered the land of Canaan, Joshua pitched the Tabernacle at Shiloh which was located about 15km north of Bethel and 30km north of Jerusalem. It was central to all the tribes (Joshua 18:1). The name means, tranquil or peaceful.

Whereas I have not dwelt in any house since the time that I brought up the children of Israel out of Egypt, even to this day, but have walked in a tent and in a tabernacle…

Archaeologists have excavated at Shiloh and it would appear that the Temple and Tabernacle were destroyed by the Philistines about 1050BC when the ark was captured and Eli’s sons were slain. Perhaps there were Temple buildings around the Tabernacle.

Nearly 500 years later Jeremiah recalled the destruction of the Temple at Shiloh and used it as an example of what God would do to the Temple at Jerusalem:

But go ye now unto my place which was in Shiloh, where I set my name at the first, and see what I did to it for the wickedness of my people Israel. And now, because ye have done all these works, saith the LORD, and I spake unto you, rising up early and speaking, but ye heard not; and I called you, but ye answered not; Therefore will I do unto this house, which is called by my name, wherein ye trust, and unto the place which I gave to you and to your fathers, as I have done to Shiloh (Jeremiah 7:12-14).

The period of the Judges came to an end in the days of Samuel who was the son of Godly Israelites, Elkanah and Hannah. In their day the nation had departed from the Lord and turned to idolatry.

God raised up Samuel and used him to turn the people back to the Lord.

The High Priest at the time of Samuel’s birth was Eli, and his sons, the priests, were extremely evil men. The Bible records that “the sons of Eli were sons of Belial; they knew not the LORD” (1Samuel 2:12).

When Israelites came to the door of the Tabernacle of the congregation to offer their sacrifices to the LORD, the priests demanded a portion and ignored the requirement to burn the fat. If the offerer did not give the priests what they wanted then it was taken by force. The Law required that the fat of the offerings be burned: 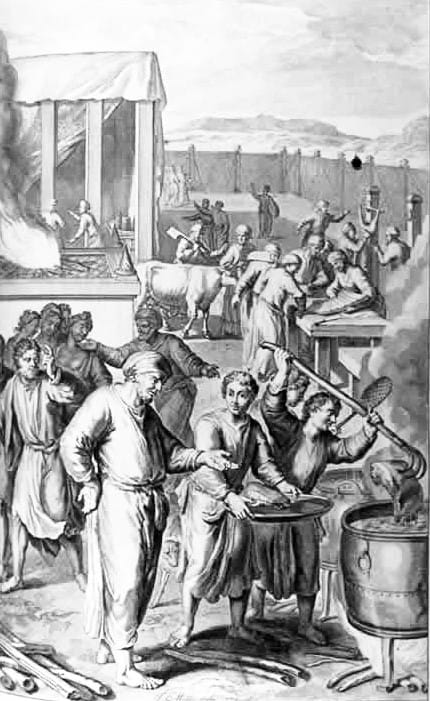 The fat thereof, and the whole rump, it shall he take off hard by the backbone; and the fat that covereth the inwards, and all the fat that is upon the inwards… And the priest shall burn it upon the altar (Leviticus 3:9-11).

Furthermore, pagan practices had been mixed with the worship of the Lord. These evil priests committed sexual sins with women who came to the door of the Tabernacle.

We know that the worship of Ashtaroth was practised at that time because when Samuel began to preach, he told the people to “put away the strange gods and Ashtaroth” (1 Samuel 7:3).

Ashtaroth or Astarte, was the Sidonian name of the Babylonian goddess Ishtar, otherwise called Venus. It would appear that the priests engaged in sexual rites associated with the worship of this Babylonian goddess of sex and fertility.

Years later, Ahab, the evil King of the northern kingdom of Israel, married Jezebel the daughter of Ethbaal, King of Tyre and Sidon.

Ethbaal was a priest of the goddess Astarte (Ashtaroth), the Phoenician god of fertility and sex.

The worship of this vile, immoral, pagan deity had plagued Israel from the time of the Judges and some have suggested that Shiloh had become the headquarters of the fertility cult and that Eli’s sons practised the sexual rites at the door of the Tabernacle.

Eli did not engage in these pagan practices and even protested to his sons, but that was not enough. God had told Eli:

I will judge his house for ever for the iniquity which he knoweth; because his sons made themselves vile, and he restrained them not (1 Samuel 3:13).

Eli knew what was right, and as high priest had the authority to correct the situation, but he was not willing to obey.

It was into this scene that God sent a Godly man and woman, Elkanah and Hannah. Elkanah had two wives which was permitted by God in Old Testament times. One wife was Peninnah (pearl or ruby) and the other was Hannah (favoured). Elkanah means, “obtained of God”.

Peninnah had sons and daughters but God had withheld children from Hannah and each year when Elkanah took his family to Shiloh he gave portions to Peninnah and her children to offer to the Lord.

Elkanah favoured Hannah and gave her a special portion to offer the Lord but she had a problem. The trip to Shiloh each year became an ordeal. Peninnah would taunt her and provoke her because the Lord had not blessed her with children.

Hannah’s problem, and the provocation of Peninnah, produced prayer, and when God finally answered, praise to God.

What Hannah did not realize was that God was at work and He had a plan for Israel. Hannah and her firstborn son were going to be used to fulfil that plan.

Understandably Hannah was distressed and began to fret and weep. Elkanah’s efforts to reassure her of his of love were to no avail. So she went to the Lord in earnest prayer. She promised the Lord that if He would give her a son she would present him to the Lord to serve in His Temple. At the time she didn’t realize how that promise was part of God’s plan. God was going to destroy the whole house of Eli, and Samuel would become the Judge of the nation of Israel to lead them back to God.

The next year, when the family brought their offerings to the Lord at Shiloh, Hannah pleaded with God for a son. With the immoral sons of Eli present she dare not pray audibly or they would have suggested pagan sexual rites. Her lips moved silently as she poured out her petition to the Lord and her anguish drew the attention of Eli.

When Eli noticed her he immediately accused her of drunkenness but Hannah replied:

I am a woman of a sorrowful spirit: I have drunk neither wine nor strong drink, but have poured out my soul before the LORD. Count not thine handmaid for a daughter of Belial: for out of the abundance of my complaint and grief have I spoken hitherto. Then Eli answered and said, Go in peace: and the God of Israel grant thee thy petition that thou hast asked of him (1 Samuel 1:15-17).

Little did Eli realise he was pronouncing his own death sentence.

Hannah received the answer she wanted and clung to the promise that God would answer her prayer. We know she believed because she was no longer sad. We read, “And the LORD remembered her” (1 Samuel 1:19).

Why did God withhold a child from Hannah? He was waiting for her vow. God needed a man who would be faithful in a time of apostasy. He needed a man to replace the weak and wicked priests at the Temple. The trial that He put Hannah through was to get that man! God allowed her to be barren. God allowed her to be provoked and fret and weep because He had something better for her. Her son would be the one to anoint David to be the King of Israel of whose line Christ would come to be the Saviour of the world.

Her problem and the provocation she endured was all permitted by God to fulfil His purposes. All she had to do was be faithful and let God work out His plan in His time.

When Samuel was born she refrained from going to the Temple until he was weaned but then she fulfilled her vow and gave him to the Lord into the care of Eli. She placed upon him the vow of a Nazarite which separated him from the sons of Eli. Nor did she forget him. Each year she returned and brought him a new coat. She trusted God to finished what He had begun.

Then one night after the lamp in the Temple had been turned out, Samuel lay in bed and heard a voice calling him: “Samuel, Samuel.” Immediately he ran to Eli and said, “Here am I, for you called me” but Eli said, “I didn’t call you.”

Three times the call was heard and the third time Eli said, “It is the Lord speaking to you. Next time you must answer: “Speak Lord, for thy servant heareth.”

The Lord called again and Samuel responded appropriately. Then the Lord told him what He would do to the house of Eli. Because Eli had allowed his sons to practice wickedness in God’s house and conduct pagan rites at the door of the Tabernacle, the priesthood would be taken away from Eli.

Next morning, when Samuel opened the doors of the Temple, Eli wanted to know what the Lord had said to him. It wasn’t good news but it had to be told. The house of Eli would be destroyed. The plan of God would unfold and God would use Samuel to turn the nation back to God.

Hannah’s problem and provocation from Peninnah, had caused her to pray and promise God she would give her son for His service. God needed a man who would be faithful in a time of apostasy. Three years later, when she returned to the Temple she came with praise to God that her prayer was answered and God’s plan was about to be fulfilled.

The lesson for us today is that God is looking for those who will be faithful in a time of apostasy so that He can fulfil His plan to bless His people. He needed someone who would obey Him. Later in Samuel’s life he had to rebuke King Saul when he failed to obey the Lord. He said:

Hath the LORD as great delight in burnt offerings and sacrifices, as in obeying the voice of the LORD? Behold, to obey is better than sacrifice, and to hearken than the fat of rams (1 Samuel 15:22).

Let us faithfully rebuke those who bring error and the world into the Church of God. The Lord’s honour is at stake. Paul wrote:

Let a man so account of us, as of the ministers of Christ, and stewards of the mysteries of God. Moreover it is required in stewards, that a man be found faithful (1 Corinthians 4:1-2).

There is also a solemn warning to those who allow the house of God to be taken over by worldly, fleshly leaders. Paul warned:

The “temple of God” in this passage is the Church. Those who open the door to false teaching and worldly programs bring themselves under the judgment of God.