It’s Time to Run from Rome 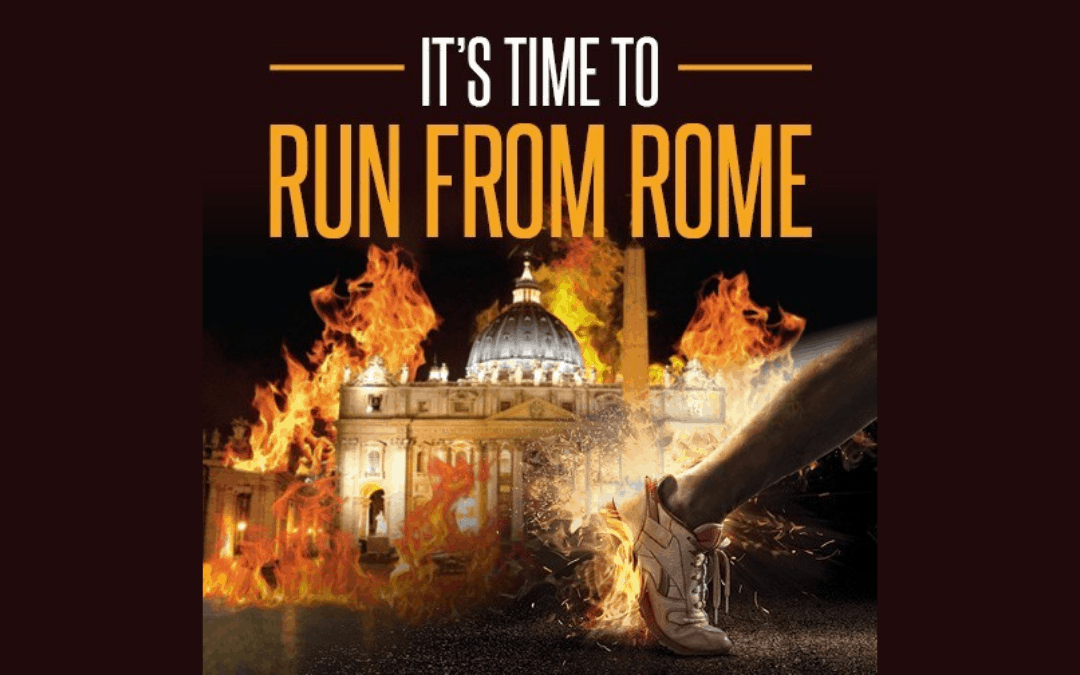 The April Herald of Hope Magazine will soon be arriving in subscribers letterboxes. This month Vince Wall has written an interesting article on the corrupt practices of the Roman Catholic Church.

It’s Time, to Run from Rome.

And I heard another voice from heaven, saying, Come out of her, my people… (Revelation 18:4)

One afternoon in the 1980’s as a young dedicated Catholic I read Revelation 18:4. I believe that the Holy Spirit used this verse and verses from Hebrews 10 to convict me that I could no longer stay in the Roman Catholic Church.

Hebrews 10.11 also showed me that there was not one earthly priest that could ever take away my sins. This discovery was made some thirty years before the current diabolical sex scandals of the Catholic Church. I found that the Church of my heritage was fraudulent and spiritually bankrupt as well as being a danger to the souls of millions. In studying the bible I realised that the location of the headquarters of my family’s church was in fact mentioned in the bible as well as a description of her character and activities.

In the book of Revelation John was informed by Jesus Christ Himself of a corrupt religious system and city that would have influence over the entire world which would be based in Rome.

And the woman which thou sawest is that great city, which reigneth over the kings of the earth. (Revelation 17:18)

The city that reigned over the Kings of the earth was Rome in John’s day. This false religious system is pictured as a woman sitting upon a scarlet beast and is named as Mystery, Babylon The Great, The Mother Of Harlots And Abominations Of The Earth. (Revelation 17:3-5)

Satan is a clever counterfeiter and he and his counterfeit churches and ministers deceive the world with their false religious activities.

And no marvel; for Satan himself is transformed into an angel of light. Therefore it is no great thing if his ministers also be transformed as the ministers of righteousness; whose end shall be according to their works. (2 Corinthians 11:14-15)

It is interesting that the headquarters for the Catholic Church is in Rome. Catholicism presents itself to the world as being the only true Church yet it is a cleaver counterfeit incorporating elements from ancient Babylonian worship as well as Christianity and Judaism.

The Catholic Church preaches another Jesus and another gospel. The “Jesus” that Papal Rome preaches is still sacrificed on the altars of every Catholic Church, yet the true Jesus finished His sacrifice for the sins of the world on the cross at Calvary (Hebrews 10:11-12).

The counterfeit gospel of Rome today includes having to attend the false sacrifice of the Mass and the Confessional for the forgiveness of sins.

Jesus was very clear that there would come wolves in sheep’s clothing and that we would know them by their fruits. Jesus also indicated that a corrupt tree would bring forth evil fruit (Matthew 7:16-17).

Every Church must be examined by their fruits.

We must not assume that any church is a true church by the wealth they have, the buildings and lands they may possess, the amount of followers or even the great things they may have accomplished. Success in the world’s eyes does not mean success in God’s eyes. Jesus indicated that not everyone that says Lord, Lord, will enter the kingdom of heaven (Matthew 7:21).

Many will say to me in that day, Lord, Lord, have we not prophesied in thy name? and in thy name have cast out devils? and in thy name done many wonderful works? And then will I profess unto them, I never knew you: depart from me, ye that work iniquity. (Matthew 7:22-23)

The true Church is universal in extent and made up of local believers who submit to God’s Word and are in fellowship with one another exhibiting the fruit of the Spirit (Galatians 5:22-23).

The early Church was devoted to the Apostles teaching and they frequently met together remembering the Lord’s sacrifice in the breaking of bread. Fellowship, faith, generosity, joy, prayer, praise, the baptism of believers and conversions were the marks of the true Church.

The false church headquartered in Rome also has produced much fruit, fruit that is rotten to the core.

A survey of history will show that the Catholic Church has exhibited good works and charity to many in various places (Revelation 2:19). Unfortunately though she has afflicted the world with her false teachings, sexual immorality, idolatry and even murderous campaigns.

The characteristics of the Catholic Church is prophesied in Revelation 2:18-25. In Revelation 2-3 we have seven letters to seven churches that existed in John’s day. In these letters we get a picture of seven stages of professing Christendom from the early church till the last days church.

The Church of Thyatira has an interesting history. Thyatira means “continual sacrifice.” This church in the Apostle John’s day, was being influenced by a false prophetess called Jezebel. Jezebel at the time was teaching and seducing God’s servants to commit sexual immorality and to eat things sacrificed unto idols.

In recent times many Catholics are beginning to see that their Church leadership is plagued with sexual immorality and a few Catholics are beginning to recognize that the church that they love is also plagued with idolatry. Sincere Catholics who think that they are worshipping God have been led by their Popes and Priests into idolatry. Mary and the Saints of old have been made into idols by the Catholic church and even their “Jesus” becomes an object of idolatry on their crosses and in the sacrifice of the Mass.

The Lord Jesus Christ made one sacrifice for the sins of the world (Hebrews 10:10-14). Christ’s one sacrifice was complete and is not to be repeated on any Catholic altar.

Wherever the Catholic Church sets up her churches, schools, hospitals or missions she sets up idolatry and whenever the Pope travels to any country he promotes the idolatrous sacrifice of the Mass and the worship of Mary.

In recent times all throughout the world we are seeing Catholic clergy being implicated in gross sexual immorality which should make many Catholics realise that their church has numbers of Satan’s wolves parading as sheep.

A few cases in point:

The New York Times reported on Feb 6th 2019 that Pope Francis has acknowledged the sexual abuse of nuns by Catholic clergy.

Francis acknowledged “there have been priests and bishops who have committed sexual abuse against nuns”, and that “it’s continuing…..” He said the church needed to do more. The article also acknowledged that abortions have resulted from the sexual abuse.

Since the 1980s in a number of countries sisters are refusing to travel alone with a priest in a car because of fear of harassment or even rape. Priests have also on occasion abused their position in their role as pastors and spiritual directors and utilized their spiritual authority to gain sexual favours from sisters.

The news of sexual abuse of children by Catholic priests is being told all over the world.

A law firm suing bishops for the records on abuse has compiled a list of more than 200 Bay area Priests in San Francisco whom have had allegations of sexual misconduct made against them.

Ireland: In Ireland  allegations of sexual abuse in Catholic institutions began to emerge in the 1980’s. Tens of thousands of Irish children have suffered wide ranging abuses in Catholic run organisations. Irish Paedophile priest Brendan Smyth abused over 140 children in Belfast, Dublin and the United States.

Germany: The German Catholic Church has released a report that shows 3677 people were abused by clergy between 1946 and 2014 and every sixth case involved rape with 969 abuse victims that had been altar boys.

Just this week, the online resource Bishop Accountability listed Brazil, Mexico, the Philippines, Congo and a handful of other heavily Catholic countries as places where the church leadership has failed to respond adequately when priests rape and molest children.

Australia: The Royal Commission found 4,444 people were abused between 1980-2015 in Catholic institutions and now the former Vatican treasurer Cardinal George Pell has been found guilty of five counts of historical sex offences against two choirboys in Victoria.

The great sins of the Catholic Church are increasingly being documented. It is clear from Scripture that she and her corrupt clergy will be destroyed.

Behold, I will cast her into a bed, and them that commit adultery with her into great tribulation, except they repent of their deeds. (Revelation 2:22)

As I write I am aware that sincere Catholics are devastated by the sexual immorality of their clergy. The corrupt tree is bearing much corrupt fruit for all to see.

Surely it is now time for Catholics to Run from Rome.

Born again believers must now take the opportunity to reach out to Catholics that are trapped in a system that may soon receive the manifold judgements of God seen in the coming Tribulation Period.

And I heard another voice from heaven, saying, Come out of her, my people, that ye be not partakers of her sins, and that ye receive not of her plagues.  For her sins have reached unto heaven, and God hath remembered her iniquities.  (Revelation 18:4-5)