The Question the Jews Couldn’t Answer 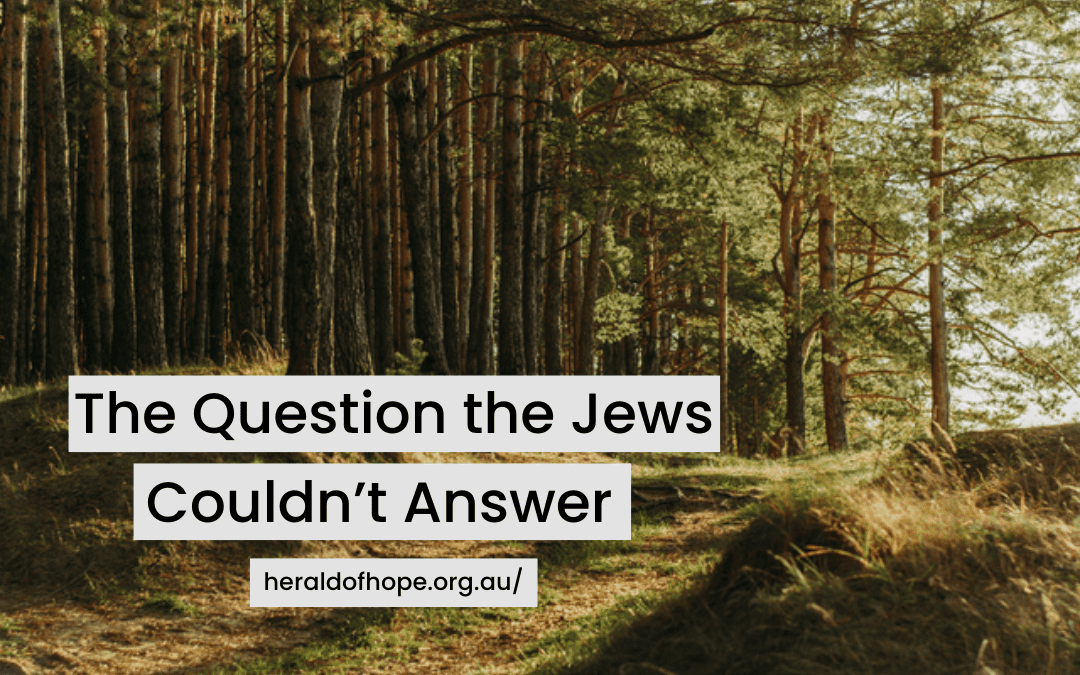 At the end of the Lord’s ministry on earth He came to Jerusalem for the Passover Feast. He arrived at Bethany on the Friday afternoon and stayed at the house of Mary, Martha and Lazarus. The day following was the sabbath and Jesus rested after the long walk from Jericho on the Friday.

On the Sunday morning Jesus rode into Jerusalem on an ass and a colt the foal of an ass fulfilling Zechariah 9:9 and was acclaimed King by the multitude. They cried:

Hosanna to the son of David: Blessed is he that cometh in the name of the Lord; Hosanna in the highest (Matthew 21:9).

On the Monday Jesus returned to the City and on the way He cursed the unfruitful fig tree; a symbol of Israel.

Next day, Tuesday, the disciples noted that the fig tree was withered and Jesus went into the Temple to teach. The Chief Priests came and asked Jesus some questions so Jesus asked them a question.

The baptism of John, whence was it? from heaven or from men?

If they said from heaven; He will say, Why did ye not believe him? They were afraid to deny it was from heaven because the people believed it was from God.

John had declared that Jesus was the Christ, the Lamb of God and the Bridegroom of the Church. John said he was not worthy to loose Jesus sandals.

The voice of one crying in the wilderness, Prepare ye the way of the Lord.

Why did they not believe him? If they had they would know that Jesus was the Christ. They had no answer.

2) The second question Jesus asked was in response to a question from the Pharisees and Herodians:

Is it lawful to give tribute unto Caesar?

Jesus responded with a question. He took a piece of the tribute money and asked,

Whose is this image and superscription?

Render therefore unto Caesar the things which are Caesar’s; and unto God the things that are God’s.

It is often the best way to answer those who oppose us by asking them a question. They left Him and went their way.

3) The Sadducees were the liberals among the Jews – they denied the resurrection. The High priests and the Herodians couldn’t trap the Lord so they tried with a question about a woman who married seven brothers. Each brother died and in accordance with the law the next brother took her to wife. The question they asked the Lord was,

In the resurrection whose wife shall she be of the seven? for they all had her (Matthew 22:28).

Jesus was quoting Exodus chapter 3verse 6 where God spoke to Moses at the burning bush. The ignorance of the Sadducees was exposed just as today modernists who attack the truth are found ignorant of the Bible. If they knew the Bible they would not attack it.

The Pharisees however believed in the resurrection and opposed the Sadducees. The Sadducees controlled the Temple in Jesus’ day and it pleased the Pharisees to see them exposed as ignorant men. So we read that the Pharisees “gathered together” and had one of their lawyers put a question to the Lord.

Master, which is the great commandment in the law? (Matthew 22:36).

The Pharisees were very impressed with the Lord’s answer but they were bitter enemies and refused to believe that He came from the Father and was returning to the Father. They were fundamental in many ways but refused to acknowledge Jesus Christ just like many devoutly religious people today. Within a few hours they would be joining with the Sadducees to cry,

We will not have this man to reign over us!

So Jesus confronted them with the all-important question.

What think ye of Christ? whose son is he?

The Lord asked the all-important question:

How then doth David in spirit call him Lord, saying, The LORD said unto my Lord, Sit thou on my right hand, till I make thine enemies thy footstool? If David then call him Lord, how is he his son? (Matthew 22:43-45).

The Pharisees could not deny that Mary and Joseph were from the line of David but to accept Jesus as David’s Lord would make Him the Son of God! In fact everybody knew that Jesus was “the son of David”. On Palm Sunday morning
the multitudes had cried:

Hosanna to the son of David: Blessed is he that cometh in the name of the Lord!

Why would they not believe that He was also the Christ? Jesus quoted Psalm 110 and the Pharisees would have known that psalm. If Jesus continued to expound that psalm it would establish His Deity beyond question and they would have no answer before the multitude in the Temple so they shut down the discourse and

neither durst any man from that day forth ask him any more questions (Matthew 22:46).

If the Lord had expounded the rest of Psalm 110 what would it reveal? They knew where the discussion was headed and that it would only establish the full Diety of Jesus of Nazareth so they quit. The psalm established:

The LORD said unto my Lord…

Sit thou at my right hand…

3. That Jesus would put down all His enemies.

…until I make thine enemies thy footstool.

4. That Jesus would rule from Zion as King of the Jews over all of His enemies.

(110:2) The LORD shall send the rod of thy strength out of Zion: rule thou in the midst of thine enemies.

5. A new day would commence when, Israel, would be willing to submit to Him.

(110:3) Thy people shall be willing in the day of thy power, in the beauties of holiness from the womb of the morning: thou hast the dew of thy youth.

6. Jesus would be our High Priest to intercede for His people by virtue of the sacrifice that He would offer.

(110:) The LORD hath sworn, and will not repent, Thou art a priest for ever after the order of Melchizedek.

7. Jesus would come in the Day of the Lord, (the Tribulation) and smite the nations as a victorious conqueror. He will not suffer or be wounded in the battle but be totally victorious.

(110:5-6) The Lord at thy right hand shall strike through kings in the day of his wrath. He shall judge among the heathen, he shall fill the places with the dead bodies; he shall wound the heads over many countries.

(110:7) He shall drink of the brook in the way: therefore shall he lift up the head.

This was Jesus of Nazareth! Is it any wonder the Pharisees were silenced? They knew the psalm applied to Messiah. They had just admitted that Messiah was the son of David. The multitude had proclaimed Jesus as the “son of David” and according to this psalm He was eligible to be Messiah, the Son of God and the King of the Jews! To continue the discussion would compel them to admit who Jesus was. They had no answer!