Who are the witnesses 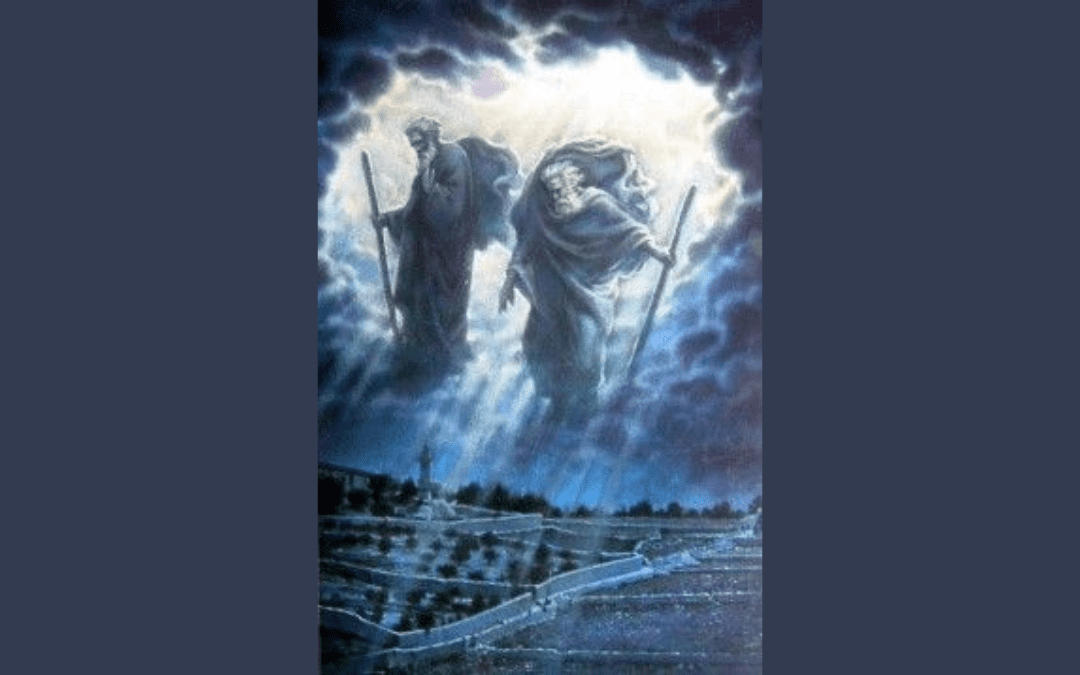 In Revelation chapter 11 we read of two Jewish Prophets who witness during the first half of the 7-year Tribulation and there has been a lot of speculation as to who they will be.

Some say that the two witnesses are Moses and Elijah because these prophets will perform miracles similar to those that occurred in the lifetime of Moses and Elijah. We read:

If any man will hurt them, fire proceedeth out of their mouth, and devoureth their enemies: and if any man will hurt them, he must in this manner be killed. These have power to shut heaven, that it rain not in the days of their prophecy: and have power over waters to turn them to blood, and to smite the earth with all plagues, as often as they will (Revelation 11:5-6).

Elijah called fire down from heaven twice when bands of 50 soldiers came to arrest him (2Kings chapter 1) and the great drought that lasted 3 1/2 years was because Elijah declared it (James 5:17). Moses stretched out his rod over Egypt and the river turned into blood (Exodus 7:20) and this was just one of the ten plagues (Exodus chapters 7 to 12) that he brought on Egypt. The similarity with the miracles that these two prophets will perform is uncanny and for that reason many are convinced that these two last-days prophets must be Moses and Elijah raised up from the dead.

Herein is a serious objection. If these two prophets are Moses and Elijah and appear in the last days in resurrected bodies how is the Beast (Antichrist) able to slay them and how could their dead bodies lie in the streets of Jerusalem for 3 1/2 days before God raises them up again. Can a resurrected body be killed? All that Scripture states about resurrected bodies would lead us to believe that resurrected bodies cannot die either in heaven of in the lake of fire. It is a spiritual body that cannot be terminated and will live for eternity. When Jesus rose we read,

Knowing that Christ being raised from the dead dieth no more; death hath no more dominion over him. (Roman 6:9).

So if resurrected saints can’t die again the two prophets in the first half of the Tribulation cannot be Moses and Elijah unless it can be shown that they have never died.

We know that Moses died because Deuteronomy 34:5-6 states it. 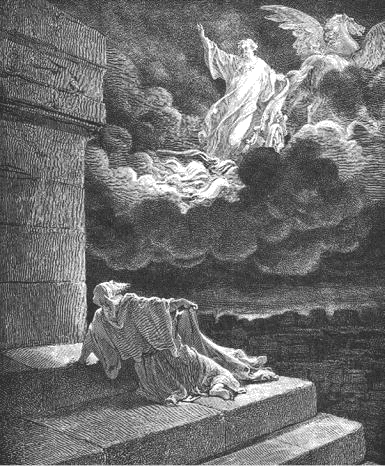 How do we know that God buried Elijah? Because nobody could go to God’s heaven before Jesus Christ rose from the dead. Before Christ rose the souls of the saved went to Paradise in Sheol. Sheol is the Hebrew word that describes the unseen world where all the souls of the dead went after death. Before Jesus rose from the dead He described Sheol in Luke chapter 16 and indicated it consisted of:
i) Paradise; otherwise known as “Abraham’s bosom” because it was where the redeemed were located awaiting the coming of Christ to make atonement for the sins of the world by His death on the cross.
ii) A place of Torment or hell where the unsaved went
iii) An impassable bottomless pit between Paradise and Torment

When the repentant thief on the cross cried, “Lord remember me when thou comest into thy kingdom”, Jesus replied, “This day thou shalt be with me in Paradise.” But the rich man in Luke 16 was tormented in flame and there was a great impassable gulf between Paradise and hell.

But that was not the end of the story. When Christ rose from the dead He opened heaven and took Paradise into heaven. The Old Testament saints who had been waiting in Paradise were raised with Christ as described in Matthew 27:52-53. Paul spoke of this event:

Wherefore he saith, When he ascended up on high, he led captivity captive, and gave gifts unto men. (Now that he ascended, what is it but that he also descended first into the lower parts of the earth? (Ephesians 4:8-9).

Thus Paul indicated that when he was caught up to the 3rd heaven (God’s heaven) he was taken to Paradise (2 Corinthians 12:1-4). Sheol now is called hades and only unsaved souls go there at death. When a believer dies his soul is

absent from the body and present with the Lord (2 Corinthians 5:8).

Moses and Elijah already have their resurrection bodies which they received the day Christ rose form the dead! So the two witnesses cannot be Moses and Elijah.

Somebody may object and say, “But doesn’t the Bible say that Elijah will come again in the last days?” In the final chapter in the Old Testament God promised that Elijah would come BEFORE the Tribulation:

Behold, I will send you Elijah the prophet before the coming of the great and dreadful day of the LORD: And he shall turn the heart of the fathers to the children, and the heart of the children to their fathers, lest I come and smite the earth with a curse (Malachi 4:5-6).

This prophecy was concerning John the Baptist. When John’s father, Zacharias, was told his wife would give birth to John he was told:

And he shall go before him in the spirit and power of Elias, to turn the hearts of the fathers to the children, and the disobedient to the wisdom of the just; to make ready a people prepared for the Lord (Luke 1:17)

This is he that was spoken of by the prophet Esaias, saying, The voice of one crying in the wilderness, Prepare ye the way of the Lord, make his paths straight (John 3:3).

And when Jesus was asked about the prophecy of Malachi He replied:

But I say unto you, That Elias is indeed come, and they have done unto him whatsoever they listed, as it is written of him (Mark 9:13).

John had been beheaded at this stage but he had fulfilled the task of going before Messiah to prepare the way before Him. Many had repented and were willing to receive Jesus Christ as Messiah.

So, if the two witnesses in Revelation chapter 11 are not Moses and Elijah and John the Baptist has already come in the “spirit and power of Elijah” fulfilling Malachi’s prophecy, who will they be?

John stated that they were “the two olive trees and two candlesticks” (Revelation 11:4) that stand before the God of the earth. This is a reference to the prophecy of Zechariah 4:3.

After the Jews returned from the 70 years of captivity in Babylon Zechariah and Haggai were two prophets who encouraged the Jews to complete the construction of the Temple amidst opposition from the Samaritans and the Usurper on the throne of Persia who named himself Artaxerxes. These two prophets were described as “two olive trees” that supplied the oil for the seven golden candlesticks providing light for the service of God in the Temple. The two prophets in the Tribulation will therefore have a similar function; they will be used by the Spirit of God to encourage the building of a Jewish Temple at Jerusalem immediately after the Rapture of the Church. Zechariah received the message:

Not by might, nor by power, but by my Spirit, saith the LORD of hosts (Zechariah 4:6).

Today we can see preparations being made for that Temple as the Temple Institute in Jerusalem has the furniture, garments and holy half shekel prepared for the priests to operate in the Temple. Jews have already begun killing the Passover Lamb on the 14th day of the month Nisan. Training courses have been devised to instruct priests how to carry out the Temple services.

So these two prophets are saved and given special protection for the whole of the first half of the Tribulation just as the 144,000 Jewish men who preach the Gospel of the Kingdom “in all the world” will receive (Rev.7:3). These two prophets will be Jews and may be two of the 144,000 for we also find the 144,000 around the throne (Revelation 14:1-5) at the mid-point of the Tribulation – they too will be martyred. These are the “firstfruits” (Revelation 14:4) unto God of Israel that will be saved BEFORE the nation turns to Christ at the Russian invasion.

The two prophets are therefore two Jewish men located at Jerusalem who turn to Christ immediately after the Rapture and they will encourage the rebuilding of the Temple; we suspect they are two of the 144,000. They will recognize the great sign of missing persons recorded in Luke 17:34-37 and Matt 24:40-42 – “one shall be taken and the other left” and when the Roman (EU) prince signs a seven-year treaty on the same day that the Christians disappear, these Jewish men will fall on their faces before the one whom their nation crucified and they will own Him as Lord and God. To be involved with the rebuilding of the Temple I suspect they will be from the Tribe of Levi and be priests of the Lord.

We ought to pray for the Orthodox Jews to the end that they will study the Book of Daniel and the New Testament. We should pray for every missionary to the Jews and encourage them to propogate the great truth of the Rapture of the Church. The great harvest in Israel will come after we have gone to glory at the Rapture for it is then that God will pour out His Spirit on the nation and through them, on the Gentiles (Joel 2:29).