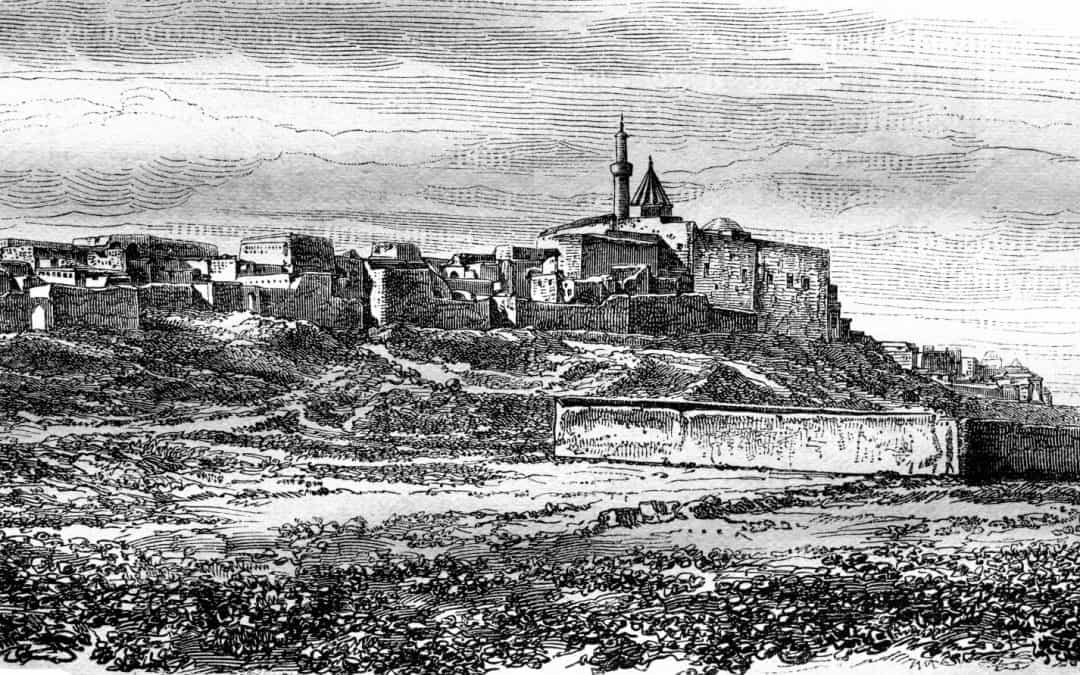 Nimrod…the beginning of his kingdom was Babel, and Erech…in the land of Shinar. Out of that land went forth Asshur, and builded Nineveh, and the city Rehoboth, and Calah, and Resen (Genesis 10:8-12).

Cush begat Nimrod…the beginning of his kingdom was Babel, Erech, Accad, and Calneh, in the land of Shinar. From that land he went to Assyria and built Nineveh and Calah and Resen between Nineveh and Calah (that is the principal city). (Genesis 10:10-12).

Spanish and Chinese Bibles agree with the modern versions because they followed the Revised Version of 1881.

Since the Bible claims to be the verbally inspired Word of God any contradiction is a serious matter; Historical errors would undermine our confidence in the rest of scripture. If we can’t be sure that the history is right how can we be sure the Gospel record is right? So who did build Nineveh?

The Two Cities – Babylon and Nineveh – were Far Apart 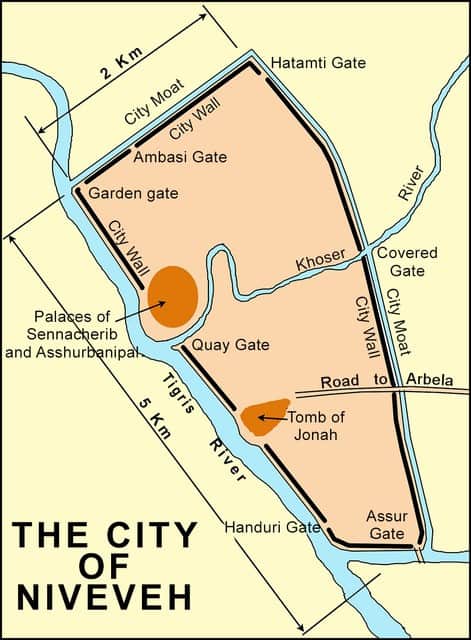 Our first observation is that Asshur was from the Godly line of Shem and Nimrod was from the ungodly line of Ham. The KJV account therefore indicates that the Godly line built a civilization 450 km apart from the ungodly line because Nineveh is located far to the north on the Tigris River whereas Babylon is on the Euphrates River and the great distance between would suggest the two families of Shem and Ham had separated.

Is there any ancient evidence available on the matter? Yes there is.

The association of Calah with Nimrod was based on loose translations of the Hebrew version of Genesis 10:11-12, which has been since refuted with substantiation from the Book of Jublees, the Septuagint, the King James Bible, the Geneva Bible, and Historian Flavius Josephus (Antiquities, i, vi, 4). Those sources clarify the translation of Genesis 10:11-12 as being associated with Ashur, and not Nimrod.

So the modern versions are based on a “loose translation of the Hebrew” text. Why? because some archeologists called the city of Calah by the name Nimrud mistakenly thinking that Nimrod built it. Translators accomodated these archeologists rather than contradict them.

The Septuagint was a translation of the Hebrew Scriptures into Greek ordered by the Ptolemy Philadelphus in 278BC by 72 Jewish elders and they had no doubt that Asshur built Nineveh.

The Testimony of Josephus

Josephus was a Jewish historian living in the first century and he had access to many ancient historical records from Persia, Chaldea, Greece, Phoenicia and Egypt that are not available today. His book Antiquities of the Jews identifies the lands into which the descendants of Noah spread after the Flood as follows:

“Shem, the third son of Noah, had five sons, who inhabited the land that began at Euphrates, and reached to the Indian Ocean; for Elam left behind him the Elamites, the ancestors of the Persians. Ashur lived at the city Nieve; (Nineveh) and named his subjects Assyrians, who became the most fortunate nation, beyond others. Arphaxad named the Arphaxadites” (Antiquities Book 1, Ch. 6, Para. 143).

Joesephus clearly states that it was Asshur and not Nimrod who lived at Nineveh and that the Assyrians were their descendants and that they were ”the most fortunate nation beyond others”. Since Josephus was a devout Jew this would indicate that those who lived in Nineveh were blessed more than other nations at their beginning; this would not be the case if evil Nimrod had built Nineveh. 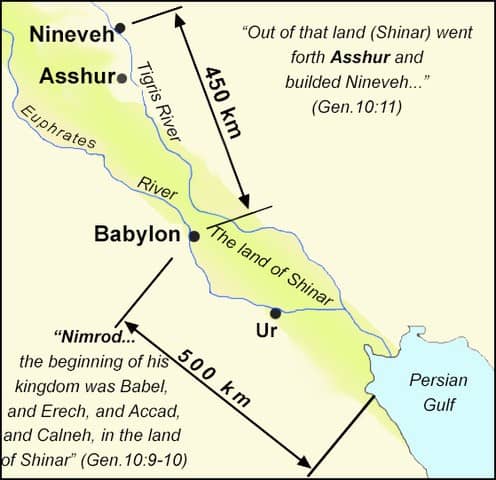 If Nineveh was a Godly city at its beginning, this would explain why God would send Jonah to Nineveh to call them to repentance and why the people repented at his preaching.

The people of Nineveh would have known about the Lord and when Jonah, a prophet of the Lord, came warning them to repent of their violence and wickedness, they feared the Lord. The King also repented.

Nimrod’s Intention was to Prevent Dispersion

It becomes clear therefore that when Nimrod built Babylon it was his intention to centralize the human race under his control for they said,

Go to, let us build us a city and a tower, whose top may reach unto heaven; and let us make us a name, lest we be scattered abroad upon the face of the whole earth (Genesis 11:4).

The intention was to centralize the population in Babylon. Nineveh was 450 km away and it is obvious that the move to build Nineveh was to escape from the evil influence of Nimrod and put distance between the descendants of Shem and the descendants of Ham. If Nimrod built Nineveh it would have fragmented his kingdom and defeated his purpose; He built Babylon so they would not be scattered abroad!!!

If the people of Nineveh were from the line of Shem, and Asshur was from the Godly line, one would expect that the Assyrian language would have some similarity with the Hebrew language.

When the tower of Babel was under construction there can be no doubt that the Godly families would not have participated in its construction. The whole purpose of God’s judgment was to stop construction and only those who were building the tower would have their language confused.

God would not judge the faithful and the line of Shem were the faithful line who would have continued to speak the one language that was spoken before the confusion of languages. The line of Shem became the Hebrew race that spoke Hebrew. Therefore if Asshur built Nineveh we would expect the Assyrian language to have some similarity with Hebrew and that is exactly what we find.

Wikipedia Encyclopedia states that the Assyrian language “ultimately descended from Old Aramaic,” which, “is part of the Northwest Semitic group, which also includes the Canaanite languages such as Hebrew and Phoenician. The Aramaic alphabet was widely adopted for other languages and is ancestral to the Hebrew, Syriac and Arabic alphabets.”

Concerning the Babylonian language the Encyclopedia states: “Babylonians used the cuneiform script, which was originally used to write the unrelated, and also extinct, Sumerian (which is a language isolate)”

So linguistically there is a connection between the descendants of Assyria and the Hebrew-speaking line of Shem. This confirms the influence of Shem’s line at Nineveh. If Nimrod was such a powerful leader and built Nineveh, he would have imposed the Babylonian language on those living in his cities. Those who believe that Nimrod built Nineveh claim that Nimrod was in total control of both areas.

The City of Nimrud?

Why then do modern versions say Nineveh was built by Nimrod? What evidence can they show to support this assumption? Those who hold this view, point to the fact that there is a city near Nineveh called Nimrud. But this is a name recently given to it; archeologists have re-named the site of the city of Calah as Nimrud because they assumed that Nimrod built Nineveh and Calah.

The ancient city of Kalhu (Calah) was gradually abandoned about 2,000 years ago, collapsing in on itself to become an unassuming mound of earth. In the 1840s it came to life again, this time as the archaeological site of Nimrud. In these pages we will explore how Kalhu became Nimrud, and how archaeological knowledge has been produced from it. Nimrud is the name that Carsten Niebuhr (About 1762) attributed to the ancient Assyrian city of Kalhu (the Biblical Calah), located 30 kilometres (20 mi) south of the city of Mosul…in the Nineveh plains in Upper Mesopotamia. It was a major Assyrian city between approximately 1350 BC and 610 BC.

So the place named Nimrud is not an ancient name at all; it is so named because an archeologist made a wrong assumption. Having named Calah that was built by Asshur, as Nimrud, all archeologists who worked on the site in subsequent years, used the same name and translators blindly followed them.

Archaeologists believe that the city was labeled the name “Nimrud” in modern times after the Biblical Nimrod. The city was identified as the Biblical city of Calah (Hebrew Kelah, Greek Khalakh (χαλαχ)), written Kalhu in Assyrian tablets. It was misappropriated alongside Nimrod in Genesis 10, by Henry Rawlinson in 1850…

Unfortunately, modern Bible translators have made the same wrong assumption as the archeologists and “loosely” translated the Hebrew text to accomodate the theories of men. Instead of believing God’s Word to be accurate they have believed what men said and accomodated them by changing the text of scripture.

The truth is that when Nimrod tried to bring all the world under his ungodly control in the land of Shinar, Asshur led some of Shem’s descendants “out of that land” and trekked 450 kilometres north along the Tigris River to establish a separate civilization away from the idolatry of Babylon. It was the first example of Biblical separation from apostasy.

The Tower of Babel built by Nimrod had a temple dedicated to the worship of the stars and heavenly bodies; a lone woman spent each night there for the pleasure of the gods who were supposed to come down to her.

Just as Abram was told by God to get out of Ur of the Chaldees and escape from the idolatry and immorality, so Asshur had moved away to preserve the truth of God. The modern versions, through unbelief, have entirely eliminated this important message.